A Hill Fort and Farmsteads, Neolithic to Iron Age Urswick and Furness

Urswick today is a quaint little village near to Ulverston but it has had a particularly vivid history of its own. On the outskirts of Urswick village can be found some of the earliest history of the area, a hill fort and Iron Age farmstead!

To the north of Great Urswick, sitting on a hill overlooking the land below, stands Skelmore Heads Hill Fort. In the picture above you can see the hill fort sat upon the limestone outcrops that adorn the top of the hill. You can see where earth has been lain to create a flattened platform, this platform is roughly 1.4 hectares in size. An earth bank and timber fence would have surrounded the platform creating a form similar to that typically associated with a fortification.

Skelmore Heads is thought to date back to the Neolithic period, around 4000 BC - 2500 BC, but would have been used and updated through to the Bronze and possibly Iron Age. Large sites like this were often used for centuries, which may give an indication to their importance.

Although called a hill fort this site in reality was no such thing. It is believed that it was in fact a site of ritual importance for the early inhabitants of Furness. The enclosed platform has no evidence of buildings or habitation. It appears that the site was used for ritual purposes, a place where offerings could be placed or buried in the ground or even inserted into the limestone outcrops. It is also speculated that gatherings and celebrations could have been held here. It seems that high lands, like the hills surrounding Urswick, were important to prehistoric man, as this is where they had their ritual and burial sites. Birkrigg common, which we spoke about previously, was a large burial and ritual site that sits on the next hilltop along from Skelmore Heads.

Roughly 1 mile south west of Skelmore Heads is a large area of mounds and ditches forming the site known as Urswick Stone Walls, an ancient Bronze to Iron Age farmstead or township.

This site is hidden in plain sight really, it is situated next to a public footpath, not far from a road entering Urswick, but many may walk right by the heritage at their feet. It is, admittedly, tricky to spot some of the features that make up the township but with a bit of moving around you will start to find the curving walls that create the enclosures.

The township was built atop a natural limestone outcrop, much like the hill fort. In the picture above you can see the limestone outcrop visible to the left, just next to this you can make out the raised embankment sweeping around into the distance behind, as well as running across to the right in the foreground. In the far distance you can just about make out the hill fort also, on top of the hill above the trees.

The section pictured would have been the living area of the township with several round houses inside with a series of walls partitioning the different clusters of houses. There are six known dwellings in the farmstead but there may well have been more that have yet to be unearthed. The whole living section of the site would have had a wall surrounding it, made from the local limestone with a large wooden palisade adorning the top of it. An image showing the remains of these walls can be seen bellow. 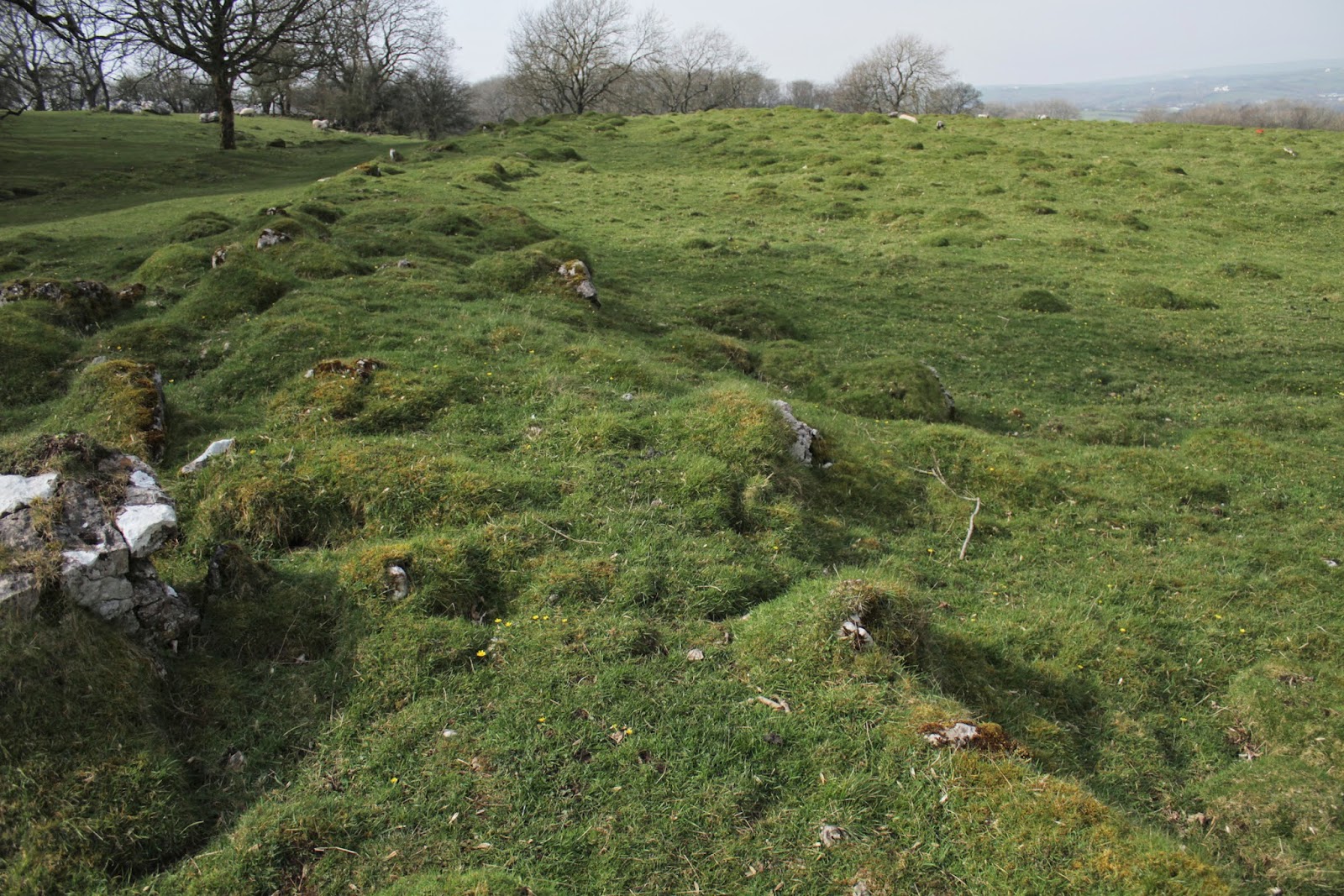 The houses of the town would have been the typical Bronze and Iron Age roundhouse design, with curved stone built walls and thatched roofs. One of the houses here was a lot bigger than the rest with a total diameter of about 12 metres. The rest had diameters somewhere in the region of 8-9 metres each. This large house was no doubt that of the chieftain or main family.

To the south west of the dwellings is a square enclosure where livestock would have been kept. This is thought to be a later addition to the site but is hard to determine exactly when it was added.

In the Bronze and early Iron Age livestock were often kept inside the houses with the people. It might seem odd now but the animals would have provided well-needed warmth, they would also have been kept safe inside the house rather than outside. It is not until later that enclosures, pens and even buildings were introduced to hold the animals.

Running alongside Stone Walls is a vein of iron ore with a length of around 400 metres. The vein has been quarried from the surface; this is clearly evident from the large ditches left today, which suggests that iron smelting was taking place at or near to the site sometime in its lifetime.

Impressive as Stone Walls is it was not the only settlement of its type in the area, although it is the biggest of those known. Roughly 1 kilometre south east of Great Urswick is another Iron Age settlement. It is situated in a field just off the road leading from Birkrigg Common to the village of Scales. The field is accessible by footpath from the roadside if you want to go in search of the site. This settlement is not as large or as grand as Stone Walls but the earthwork remains are clear as day (see below). There is a large ditch with a mound protruding from the ground creating the living enclosure. Within the enclosure are the visible outlines of two round houses, although there most certainly would have been more.

Another known settlement of this type was near Stainton with Adgarley. The site here has been recorded as being of a substantial size and it yielded many finds dating to the Bronze Age, such as bronze axe heads. Unfortunately much of this large site has been lost leaving little evidence. Having said that though there is one part of it, or what may have been a later edition next to the original site, still intact today. The site that is left appears to have a curving outer mound or wall, much like the other two sites, and has the remains of three round houses within (see below). There could also be a square animal enclosure to the southwest but it is hard to tell without archeological excavation. The original, larger, site showed evidence of iron smelting much like at Stone Walls.

All three sites are similar in the respect that they are built next to or into limestone outcrops. This is no doubt to aid in the construction of the settlements. Some utilise the limestone in forming part of the enclosure, others may sit on top of it to provide sturdy foundations. Or it could simply be that they are built next to or on top of limestone because, well, that was the stone that was around them.

It’s hard to say for certain exactly what is going on at these wonderful sites, as they haven’t been fully examined by modern archeology. Some of them, such as Stone Walls, have been excavated in part during the 19th-early 20th century when little was really known about prehistory. This means many of their secrets have yet to be brought to light!

I, for one, would love for more work to be undertaken at all these settlements.  To gain a better understanding of the people who lived here during prehistory and to see artifacts used in their every day lives uncovered for all to see would be a wonder to behold.

The prehistoric periods of Furness history are little explored and thus little known about and that is a true shame. 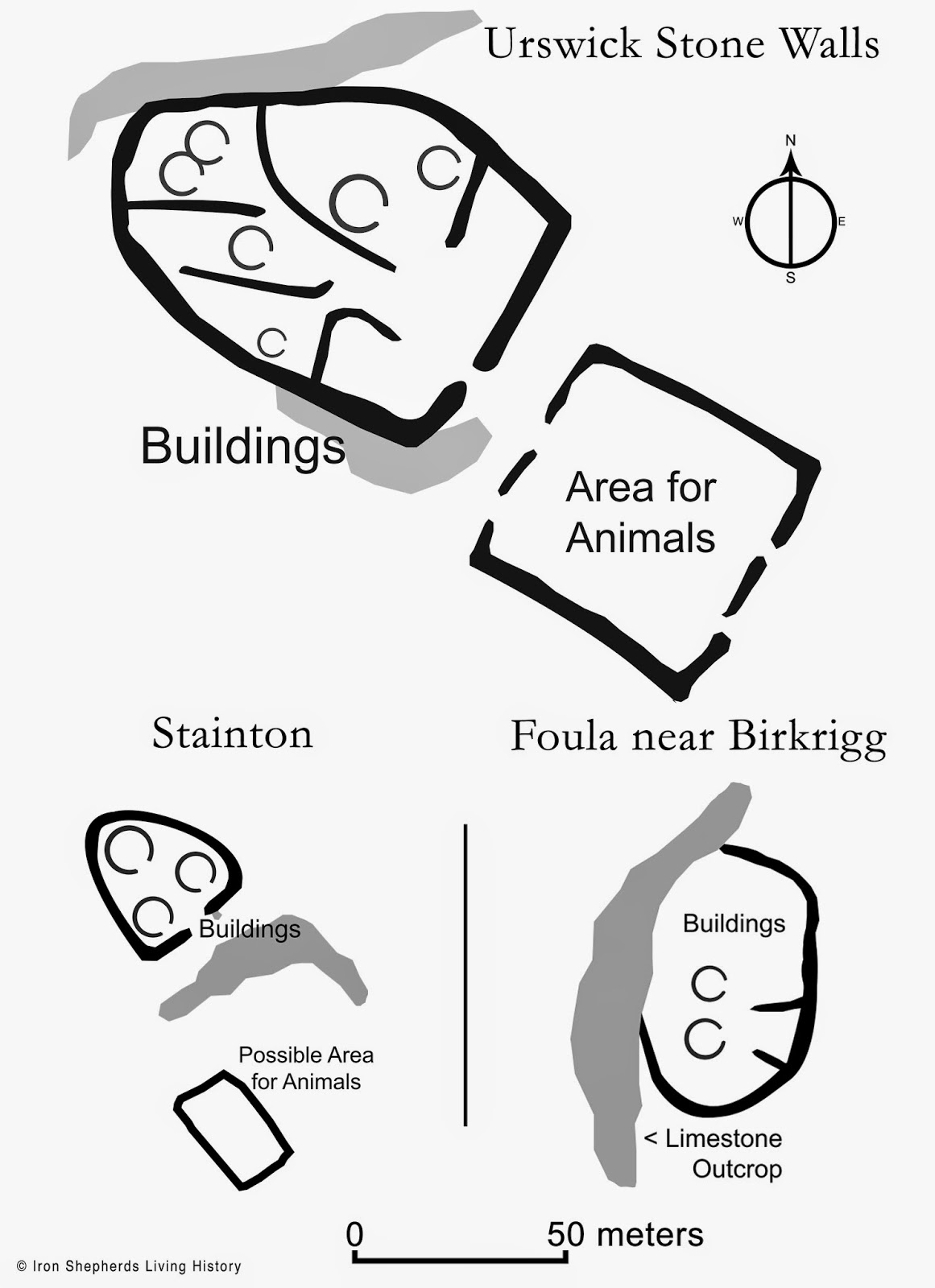 These plans are estimates of how the settlements may have been laid out. Mapped using aerial images with visible marks as well as trips to the sites, plotting out the walls and buildings then drawing over the aerial images. The Urswick Stone Walls plan is more accurate as the marks are very visible and there has been archeological surveys done to produce similar plans.