A Hidden Manor House and Medieval Tower, Broughton Tower | Life in the Past Series

Set back from the village of Broughton-in-Furness, hidden by trees, stands the interesting and suitably impressive Broughton Tower.

Currently private flats Broughton Tower started life as a 14th Century pele tower, much like those found in towns like Dalton-in-Furness. The tower, much like many others, was erected to defend against the ever growing possibility of Scottish attacks. Something that was a common threat at this time as the Scots were performing constant raids on England. In the picture above you can see the original pele tower, with its typical crenelated Medieval style, in the centre of the large complex of buildings.

Much like the castle at Dalton the tower was most likely used as a manorial court, a place where local disputes and wrong doings could be brought in front of the monorail lord and brought to a conclusion. The tower even as a dungeon which could be used to hold wrong doers before further punishment.

The tower was constructed by the Broughton family, Lords of the Manor of Broughton. They stayed in the town until 1487 when Sir Thomas Broughton was killed in the battle of Stoke. Thomas had allied himself with Lambert Simnel and fought against the Kings men for him. On his death his seat at Broughton was seized by the crown and given to the 1st Earl of Derby.

Some hundred and seventy years later the 7th Earl of Derby was executed for his allegiance to Charles II. It was then, in 1658, that the tower and the seat was passed to the Sawrey family. They kept ownership of the tower until the 1920s. The Sawreys, during the 18th Century, turned the tower into a manor house. A grand extension was added to the original 14th Century tower creating a much larger and impressive structure, the structure we can see today. 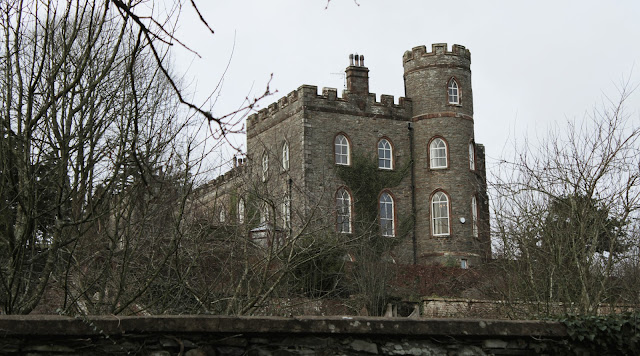 The whole site was turned into flats in recent times, which are now in private ownership. This means that the historic site is off limits for any visitors but you can walk along a public footpath through a nearby field and be rewarded with great views of the structure, including the original 14th Century tower.

The manor house and original tower are a real piece of hidden heritage, tucked away out of sight behind the small town of Broughton, and is a real treat to stumble across!