Set above the beautiful ruins of Furness Abbey lies the extensive Abbots Wood! 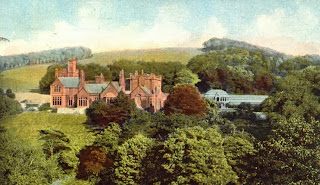 Abbots wood is a popular destination for locals with several well-trodden paths but look a little closer and the woodland, which takes its name from a Victorian Manor house that once stood proud amongst the trees, gives away some of its secrets.


Abbots Wood house was built sometime in the 1850s-60s for a young Mr. James Ramsden. The grand total of £2000 was spent to build the house and Mr. Ramsden was then allowed to live there at a rent of £205 a year. James Ramsden was a key player in the Furness Railway, which lead to the rapid expansion of Barrow from a small fishing village to the town it is today. Ramsden himself was knighted in 1872 due to his work in the area.


After his death in October 1896 the property had a number of owners and was even used by the military during wartime. It was in the 1960s that the house was eventually demolished due to having fallen into a state of disrepair. But the area was not left dormant as a large concrete structure appeared at the site during the Cold War years to act as a control center incase of a Nuclear war!

Today three lines of sandstone blocks, taken from the demolition rubble, mark the site of Abbots Wood house. Oddly enough these wall structures show nothing of the positioning or scale of the original building! The building would have been further forward and stretched across most of the grassy area seen to the left. You can see the size of the building in the image above.


Apart from these slightly obscure remnants of the former house there are some other interesting features to be discovered around the dense woodland. 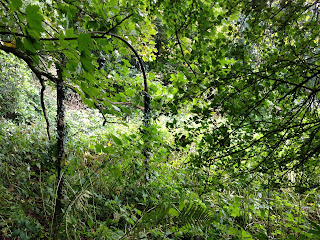 Dotted through out the trees to the East of the main path through the woods, just before the stonewalls, there are several iron gateways to be discovered (see right). Some of these gateways are in better condition than others but even when broken they stay as reminders of a more formal time in the woods. The gateways are the remains of the gardens that once sat next to the mansion; these specific arches are believed to be where an orchard once grew. It is certainly hard to imagine an orchard or any kind of formal garden here today as the trees and undergrowth have grown wild destroying any evidence of formal planting. But to wander through the vegetation and discover these fabulous metal structures seemingly growing out of the ground is a fantastic thing. Even now, knowing where they are, it is still something special to find them; it's like discovering a secret garden amongst the trees. 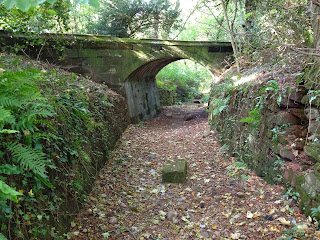 At the far end of the wood some other interesting features can be found that are linked to the manor house. Just before leaving the woods into a large field you walk over a small bridge. This bridge does not cross a river or a stream but instead crosses the old servants passage/trenches. Servants would once have used a large trench to move through the woodland to get to the manor house with out getting in the way of any visitors. The main drive for the manor would have gone over the bridge having come through the large field from a gatehouse at the top of Mill Brow in Dalton.


The trench runs from outside the woods, under the bridge then around the back of the trees to open out at the clearing where the mansion once stood. This created a quick and easy route for servants to get to the house without crossing the main drive. Along the trench there are some gates and steps where the servants could access other areas of the houses grounds. You can easily find a set of steps leaving the trench near to the bridge structure. Presumably this was for servants to get to the driveway to greet visitors. 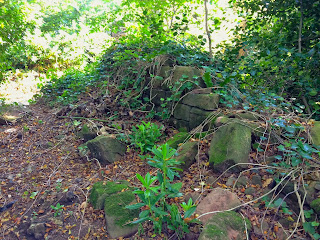 With all the Victorian history that litters the woods it may be easy to miss some of the earlier history that lies in the area. Not far into the woods on either side of the roadway stands the remains of part of Furness Abbey's precinct wall. The precinct wall was a large sandstone construction that ran around the land surrounding and owned by the Abbey. This cuts straight through Abbots Wood heading down towards the Abbey itself. You can see the wall stretching across a field next to the woods as well. It is interesting to try and imagine how the landscape may have looked when the precinct wall was intact, was the woodland there in Medieval times or was it land that was used by the Abbey? Either way it is great to see these reminders of the Medieval past.

There is so much hidden heritage to be discovered in Abbots Wood from the Medieval walls to the Victorian Servants trench so why not take a trip and have an explore?

Check out a selection of other pictures taken around the woods bellow and look out for the next blog all about Birkrigg Common on 15th October! 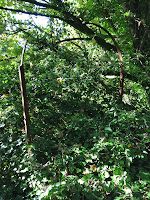 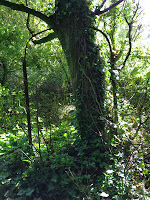 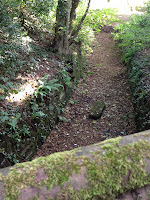 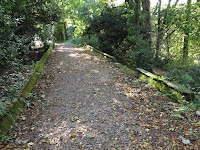 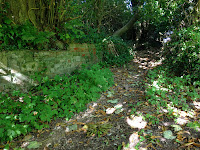 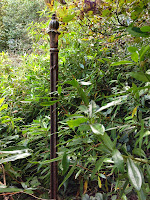