The Remnants of a Lakeland Industry, the Haverthwaite Charcoal Burner's Huts

To the top of Furness and inside the Lake District National Park, just before reaching Windermere, is the quaint village of Haverthwaite, a village best known for its steam railway. 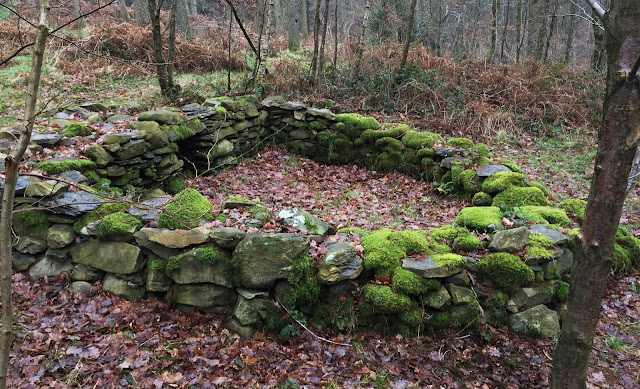 To the south of the village is a large area of woodland known as Haverthwaite Heights. Although now a peaceful, isolated and beautiful area of wildlife this woodland would once have been alive with industry, the industry of charcoal burning.


Charcoal was a product in demand during the Victorian era with many large industries, like steelworks, requiring large amounts of charcoal to burn and produce high heats. Due to this many of the woodlands in the area and across the Lake District would be littered with charcoal burners and the huts they stayed in.


Charcoal burning takes along time and requires overnight attention so the men who undertook the process would build shelters out of stone and wood often using thatch or turf as a roof. These shelters could then be used as a base while working and somewhere for the men to lay their head down when they had a moment.

The remains of several of such structures can be found dotted across the woodlands on Haverthwaite Heights. These examples were created with a low stone wall as a base which would most likely have then had wooden posts stretching up around the wall to meet in a point creating a tepee structure.This would then be covered with thatch or turf - turf being a better option as it isn't flammable.

Interestingly many of these structures have sizable holes through their walls opposite their entrance. These may well have been for a metal extraction pipe/chimney for a log burner, something to bring a bit of comfort to the otherwise rustic accommodation.

All that now remains of these once well used structures are the low level ruined walls which created the foundation of the wooden structure above. They are a wonder to stumble across and certainly evoke an image in ones mind of days long gone when the men, in their waist coats and flat caps, faces blackened from the charcoal and soot, would emerge from their huts to check their wood burn. Producing masses of charcoal ready to be sold to the steel works or the iron furnaces, working long hours to make ends meet and provide for their families. It certainly can't have been an easy life but I am sure it had many joys.

Several footpaths run through Haverthwaite Heights but I found the best walk was to park up in near by Backbarrow, walk under the railway, through a small tunnel, and head up onto the top of the heights to descend down onto Lanes End, the charcoal burner's huts being found as you make your descent. There is a relatively steep ascent but it is certainly well worth the effort of climbing, not only to find the huts on the way down but for the stunning views from the heights. 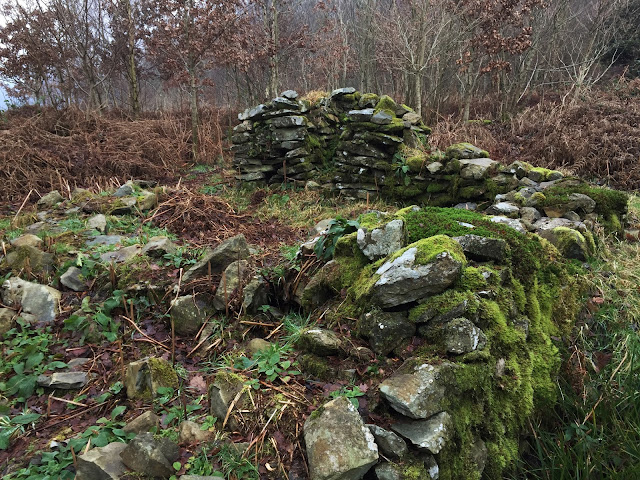 Tucked away in a small wooded area on a footpath between Dalton and Barrow-in-Furness is a hidden remnant of the past, the remains of Little Mill.

Originally built by the monks of Furness Abbey Little Mill would produce flour for the monastery from grain, using a waterwheel to power the mill stones. It was one of many mills the abbey owned and ran across Furness.

A man made mill pond would have been situated above the mill, filled with water diverted out of the near by Poaka Beck. A water shoot would bring water from this pond to the mill and send it cascading over the top of a large wooden waterwheel. This powerful stream of water would turn the wheel which in turn moved all the cogs and mill stones within the mill building, grinding corn into flour. Where exactly the mill pond was situated and where the shoot was placed is unclear but you can still see evidence of where the mill once stood. Several ruinous sandstone walls give an idea of where the mill buildings once were and there is even a mill stone partially buried in the ground near to these walls.

The mill was in use right through to the 19th Century but the building of the nearby railway brought an end to production at the mill. It was lived in for a time but eventually was left to rot and be mostly demolished.

You can find the site of Little Mill along the footpath leading from Goose Green in Dalton to Furness Abbey (part of the old Cistercian Way). You will stumble across the above mill stone, likely a remnant from the mills later activity, sticking out into the path, look towards the trees behind this to discover the mill site.

It is well worth a wander down this lovely old footpath to truly walk in the footsteps of our ancestors and find this hidden part of our local history.