Slightly hidden behind a tree-lined graveyard in Urswick stands the Church of St. Mary and St. Michael, an ancient and wonderful little church. On a site with a history dating back to, at least, the Viking age the church has a lot to discover within its stone built walls. 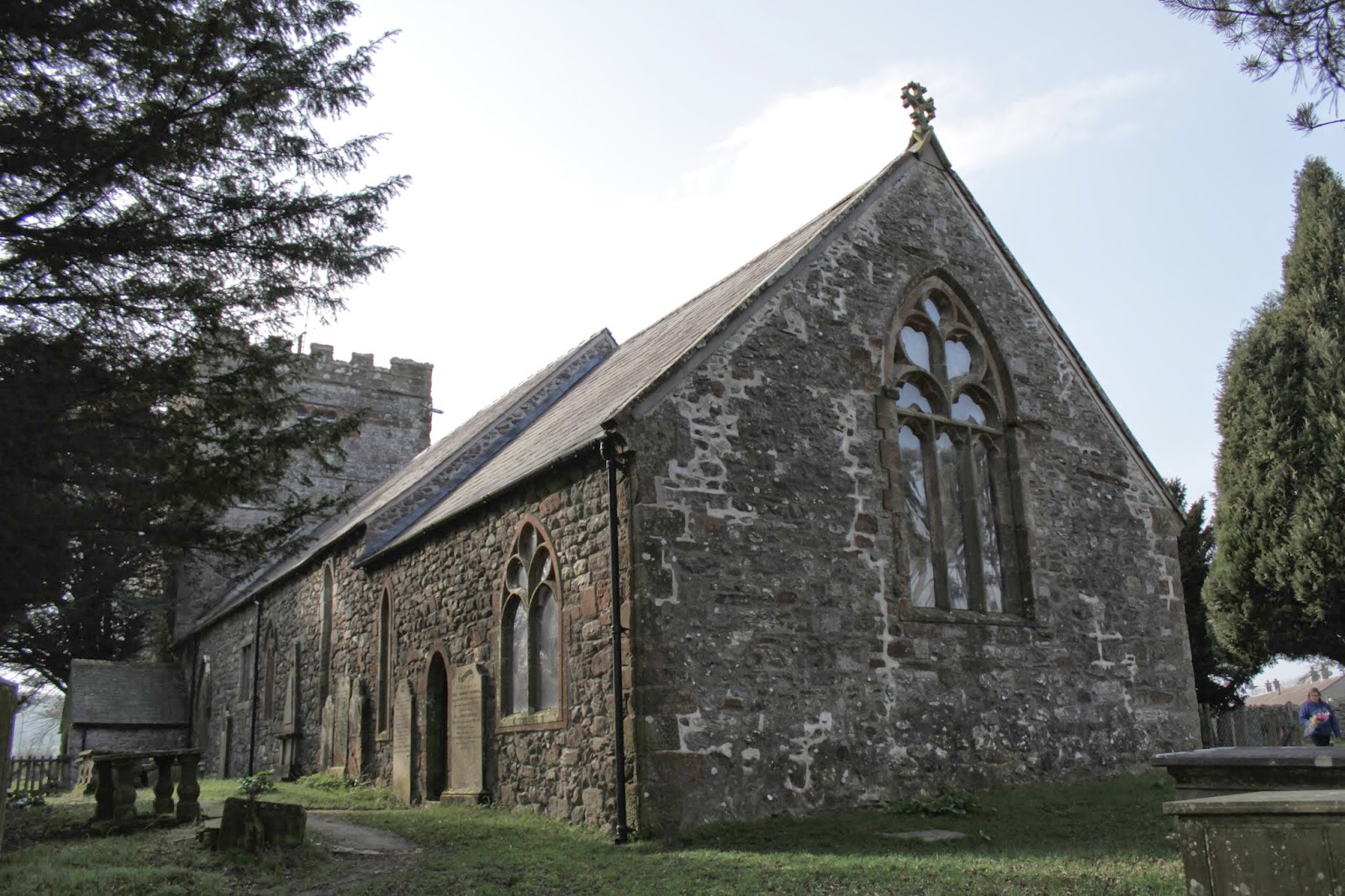 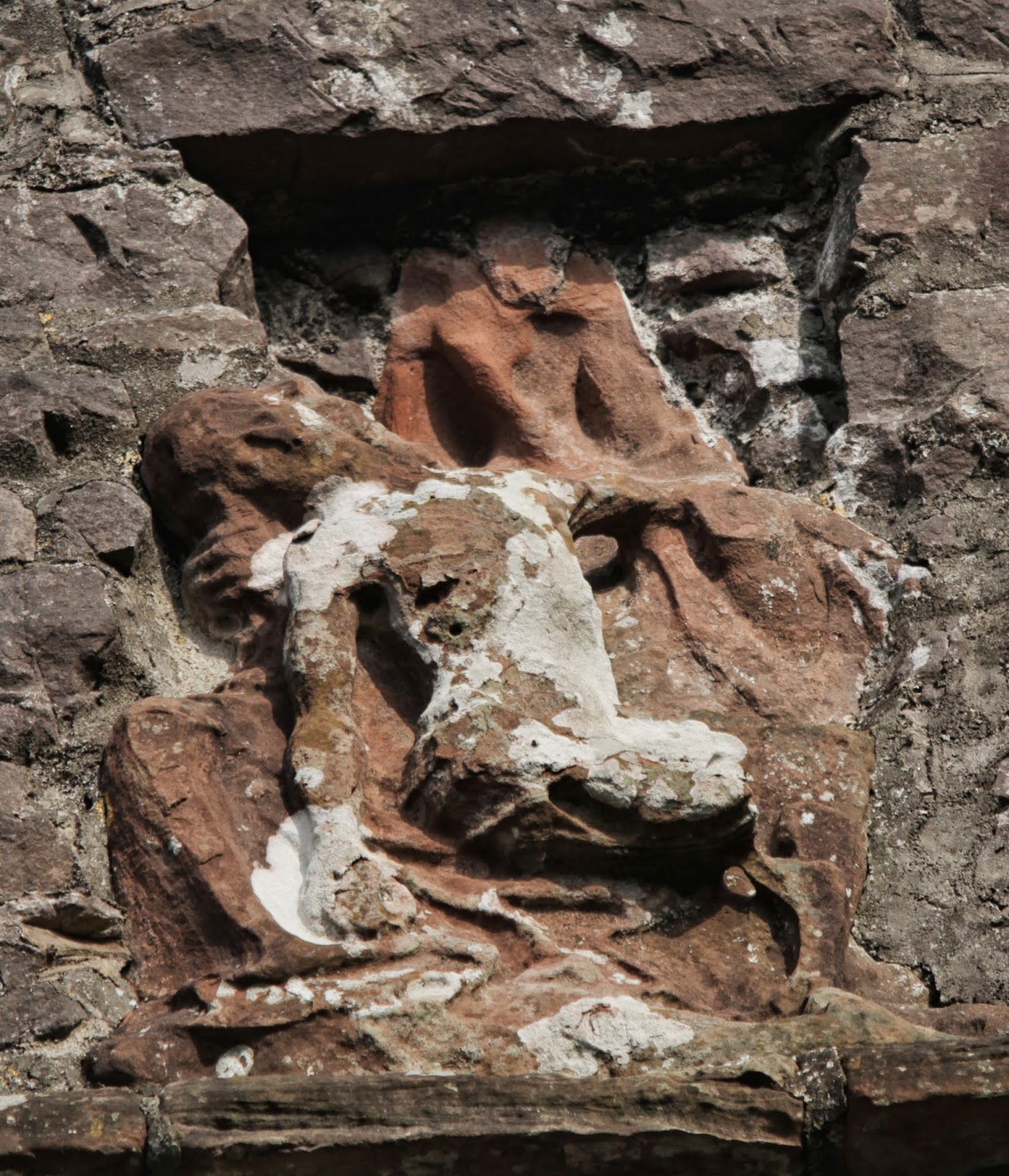 One of the first interesting little features to be found at this church is outside about half way up the tower. The bottom part of this tower is believed to be pre-Norman and was possibly some form of pele tower to provide protection to the locals. A sandstone lintel runs around the tower marking the top the original keep. But sitting on and above this line, to the left of the western end of the tower, is a rather weathered sandstone sculpture. This sculpture is of the Mother Mary holding Jesus after the crucifixion. The sculpture is thought to have been from Furness Abbey and placed in the tower here after the dissolution of the monasteries. The top section of the tower was built in the Tudor period so it would certainly fit.

Within the church itself can be seen another, much earlier, piece of carved sandstone. This piece is known as the Tunwini Cross and dates back to the period of British history known as the Anglo-Saxon period. The stone was a fragment of what would have been a larger cross. The slab was found in 1911 when work was undertaken at the church to expand a window. The cross section was built into the wall below the lintel of the window. On discovery an expert in Northern English Anglo-Saxon and Scandinavian crosses was called to the church. Having studied the cross he determined that the cross was Anglian with hints of Celtic design and dated to about 850-870 AD. He also deduced that the ruins carved into one side (as seen below right) read "This cross Tunwini erected in memory of Torhtred a monument to his Lord. Pray for the soul." 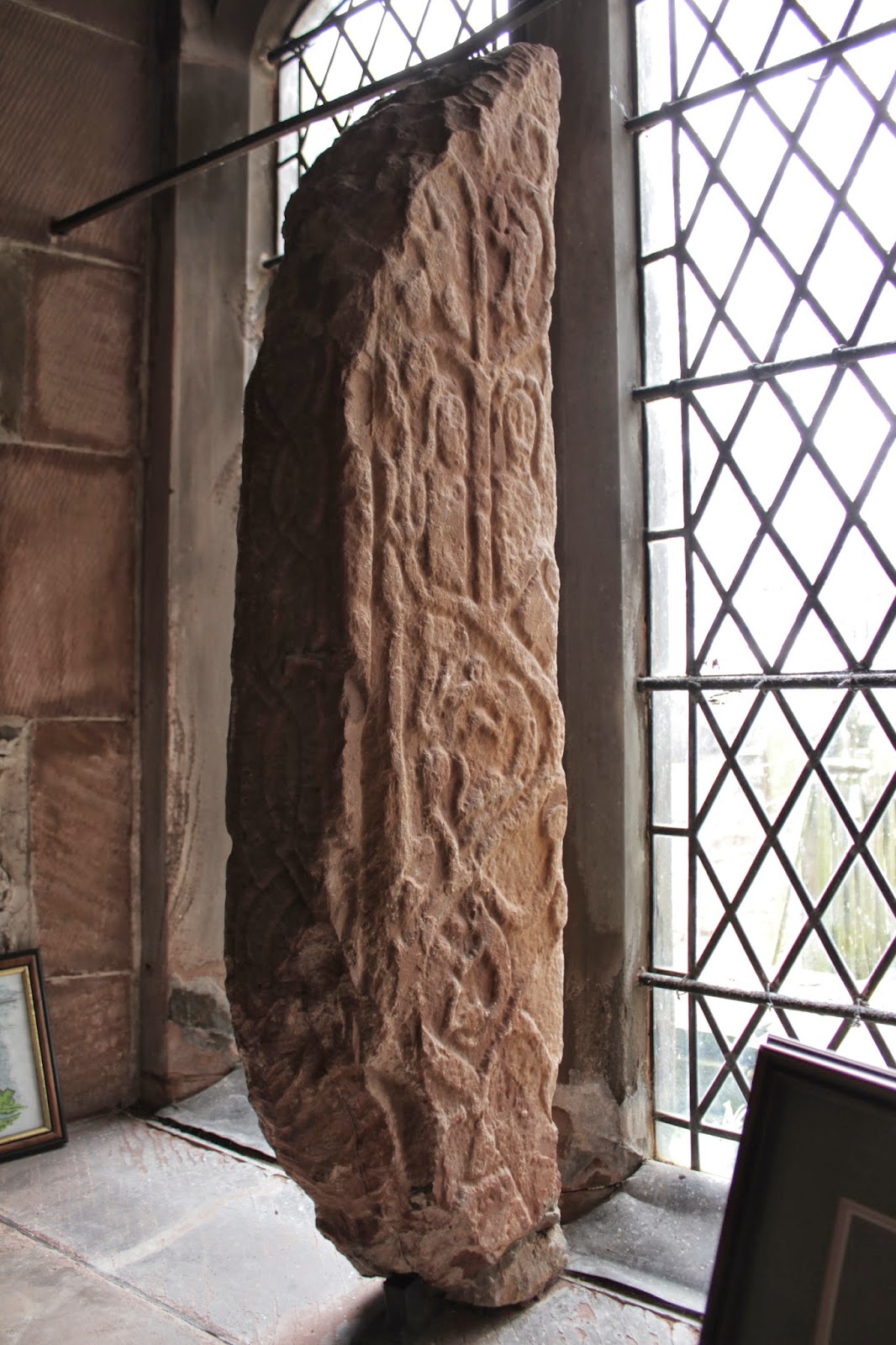 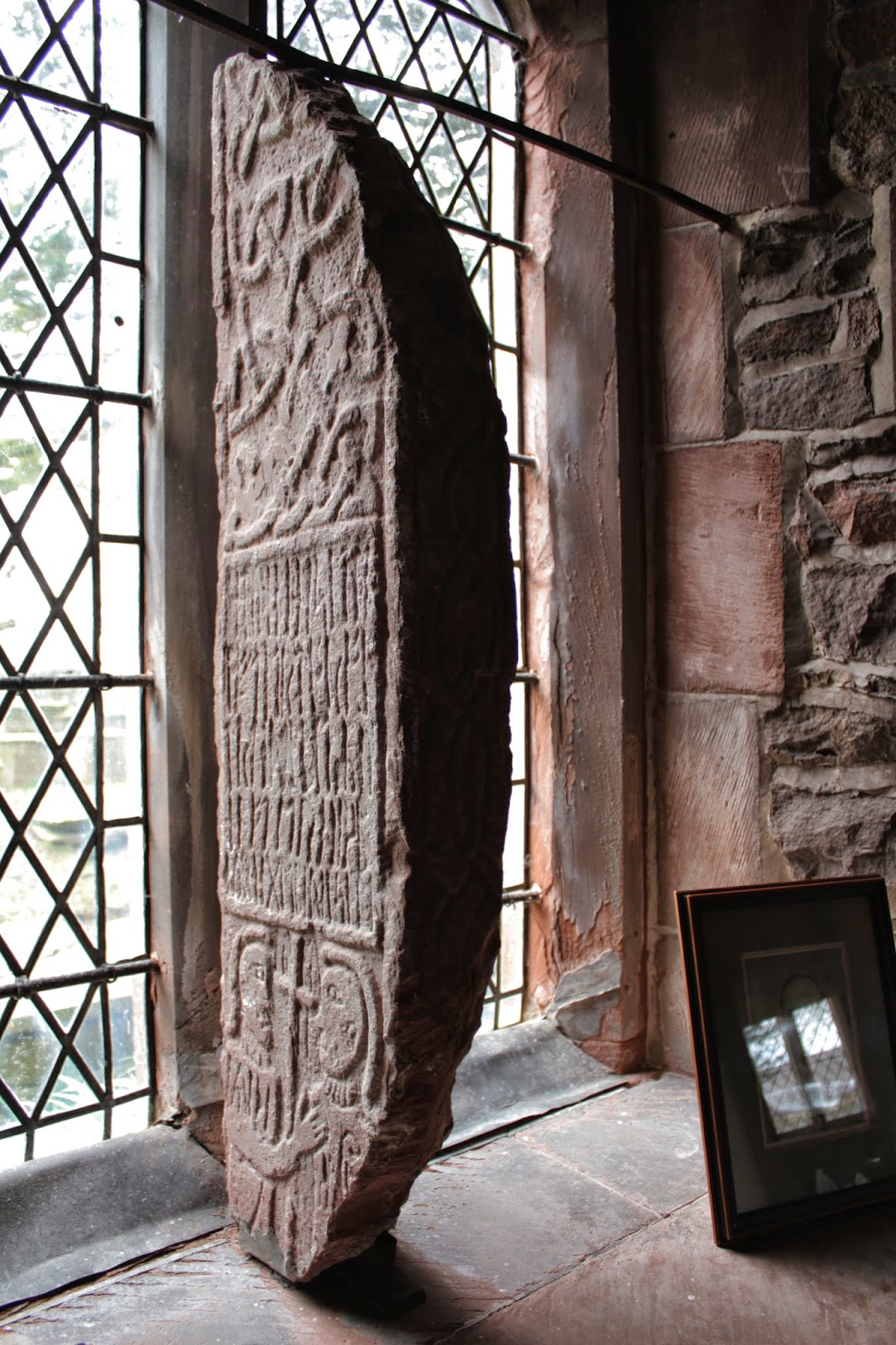 Later studies have suggested that the current ruins adorning the cross have been carved on top of an earlier runic inscription. It is thought that the original runes, and thus the cross, was produced to commemorate a meeting between the 7th Archbishop of Canterbury, Theodora, and Tarsus, prior of a monastery named Elen. It is also theorised that the two figures carved below the text are these two men. This would date the cross to the later 7th to early 8th century, one of the earliest runic inscription discovered in Britain.

The finding of the cross was during one of many alterations the church has undergone over the centuries. The original church would have most likely been where the current nave is and been lower with a roof probably made of reeds. The stone church present today was up to its current height by 1598 and, as mentioned earlier, the tower was modified and extended in Tudor times. 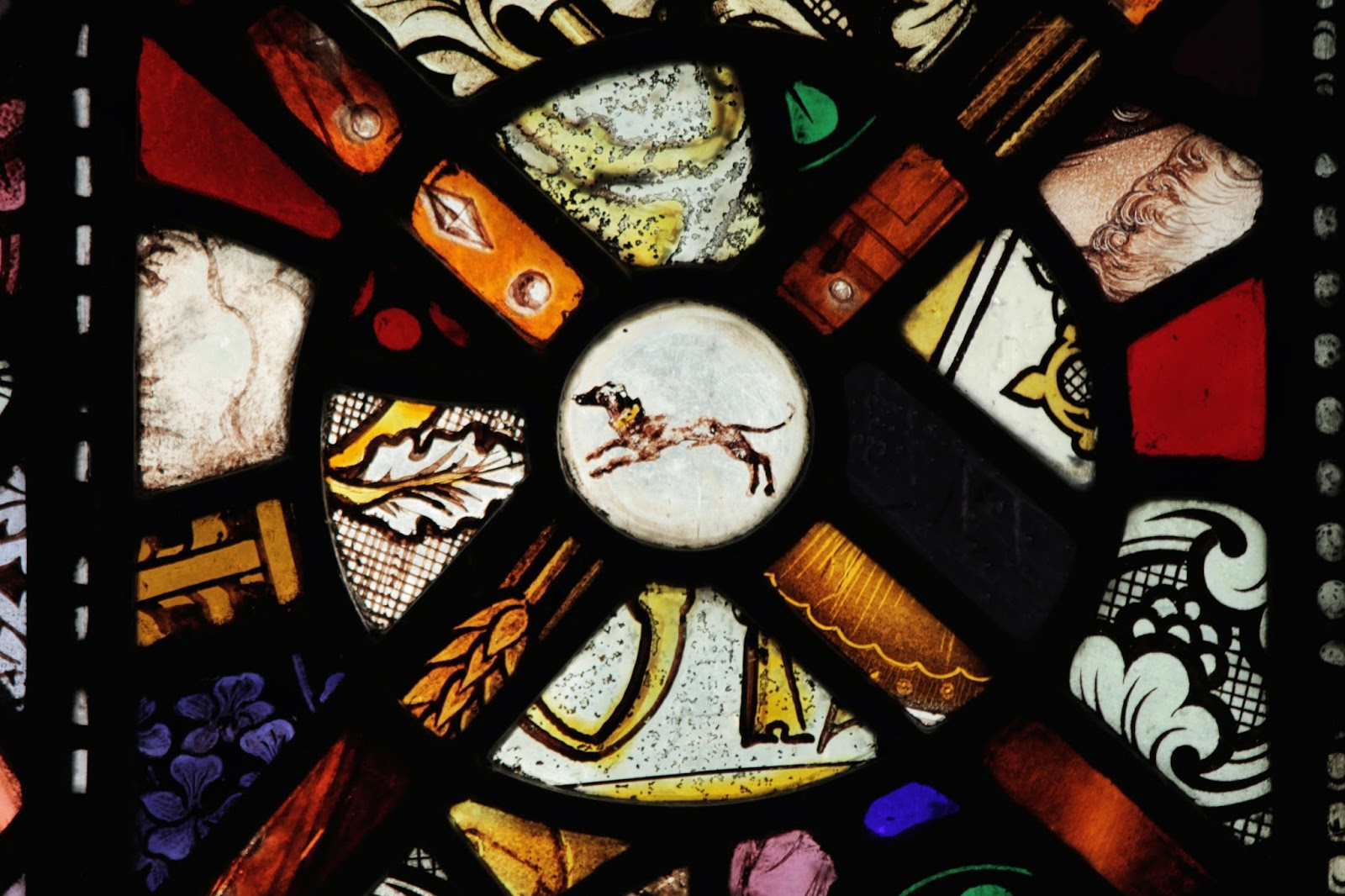 The chancel of the church was added much earlier in the Norman period and has many interesting features including several lovely stained glass windows, but one of these windows is particularly interesting. A long thin window, made up of various pieces of broken glass, has fragments of stained glass originally from Furness Abbey. It cannot be determined exactly which pieces are from the Abbey but the circular piece with a greyhound inside it (see left) is a very likely candidate. It is also probable that the yellow, white and black pieces are from the Abbey too, as they match up in style with other fragments of glass dotted around the area known to be from Furness Abbey. To the top of the window is an Abbots hat along with a crozier extending up behind it, this section is also believed to be from the Abbey. It is very tricky to say exactly where each piece of glass comes from where as they have all been interspersed with later and modern glass. This does make for quite a fun activity though; trying to work out what bits you think could be from the Abbey or not. I certainly spent a fair bit of time trying to work it out! 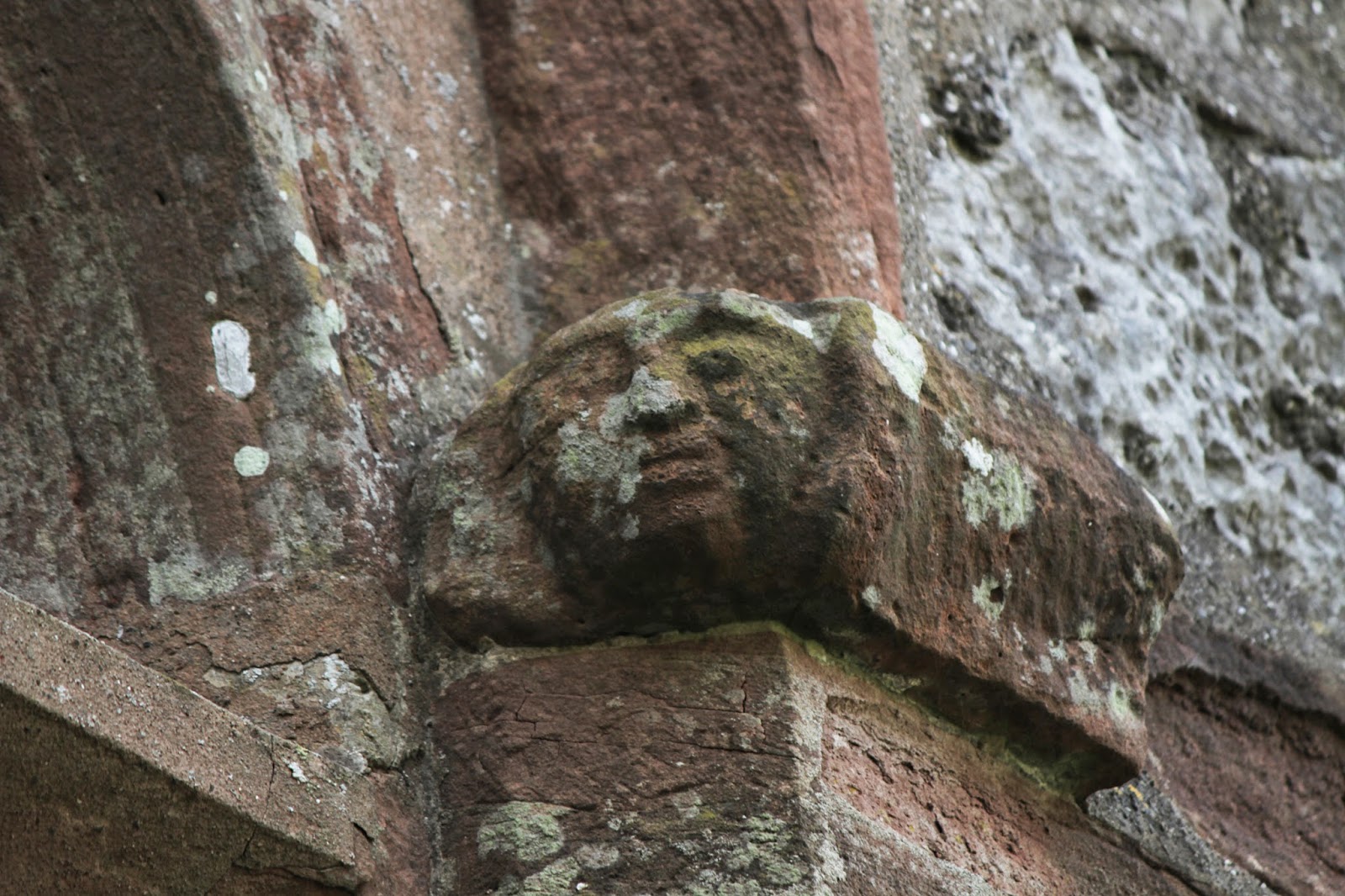 Looking around the inside and outside of the church you can find many different features from a squint, a cut through the chancel wall so that anyone sitting in the pews behind can see through to the alter, to various wooden and stone carvings. Including two very early looking carved heads that sit outside the east window (see right). While I was at the church a man who helps look after the church said something that seemed to ring true. He said that a man once came to the church and had commented that 'you can feel the history emanating from the walls', or something to similar effect. I can certainly see what he means, when you walk in you can really sense the age of the building and you know it has seen a vast amount in its time. Having been here since at least Anglo-Saxon times it will have certainly seen a fair amount, with the surrounding village changing and expanding to an array of different visitors. The site itself might even date back to an earlier time. A fragment of a Viking cross, with knot design, has been found in the church grounds in the past which does give evidence to Viking settlement in the near vicinity, if not early Viking religious activity! Unfortunately this cross fragment is not on display in the church but there is an image of it, along with an artists impression of what the rest of the cross may have looked like.

Urswick Church really has a lot of hidden heritage to offer, both inside and out. The church is often open for the public to visit, except when services are taking place, so it is well worth a visit. It is easy to reach by foot, just off the main road through Urswick. There is also a small car park for visitors should you wish to visit by car. This site is an ancient one and the church itself is one of the older in Furness so why not have a look?

Come back on 29th April for the next Furness Hidden Heritage blog post looking at some interesting features on Walney.