Fading Faces in Medieval Quarries - The Amphitheatre Next to Furness Abbey

Many people will know of Furness Abbey, the stunning red ruins that expand from the earth in majestic beauty, but you may not know some of the heritage that is hidden in the land surrounding it. In this post we will explore some of the interesting areas that lie just off the beaten path around the great natural Amphitheatre from medieval quarries to the Custodian's Cottage, the last remaining building from the time of the Abbey to still be in use today!

Spreading out from the Abbey ruins is the appropriately named Amphitheatre. This area of land is so named as nature has created a large curving bowl, with large steep sides sweeping around the land below forming part of the valley of Beckansgill. In and around the Amphitheatre there are many interesting features that hint at the Medieval construction of the Abbey itself. To the far left of the Amphitheatre, as you look from the nearby car park, there is an area of trees sitting on the slope. If you were to strip away these trees you would find the remains of a quarry once used by Monks to cut stone for the Abbey walls. You can visibly see two track ways that extend out from this quarry. One sits about half way up the slope and curves around the Amphitheatre while lowering to ground level where it ends at the foot of the slope. Another is just at the top of the slope and curves right around the area to another patch of trees on the right, we will talk about what lies in these trees later. As well as the two tracks there is a distinct ditch that runs down the slope from the top track to the bottom one. It is uncertain what this is but could it be where stone, dragged from the quarry along the top path, was lowered to the bottom path to then be taken down to the Abbey? 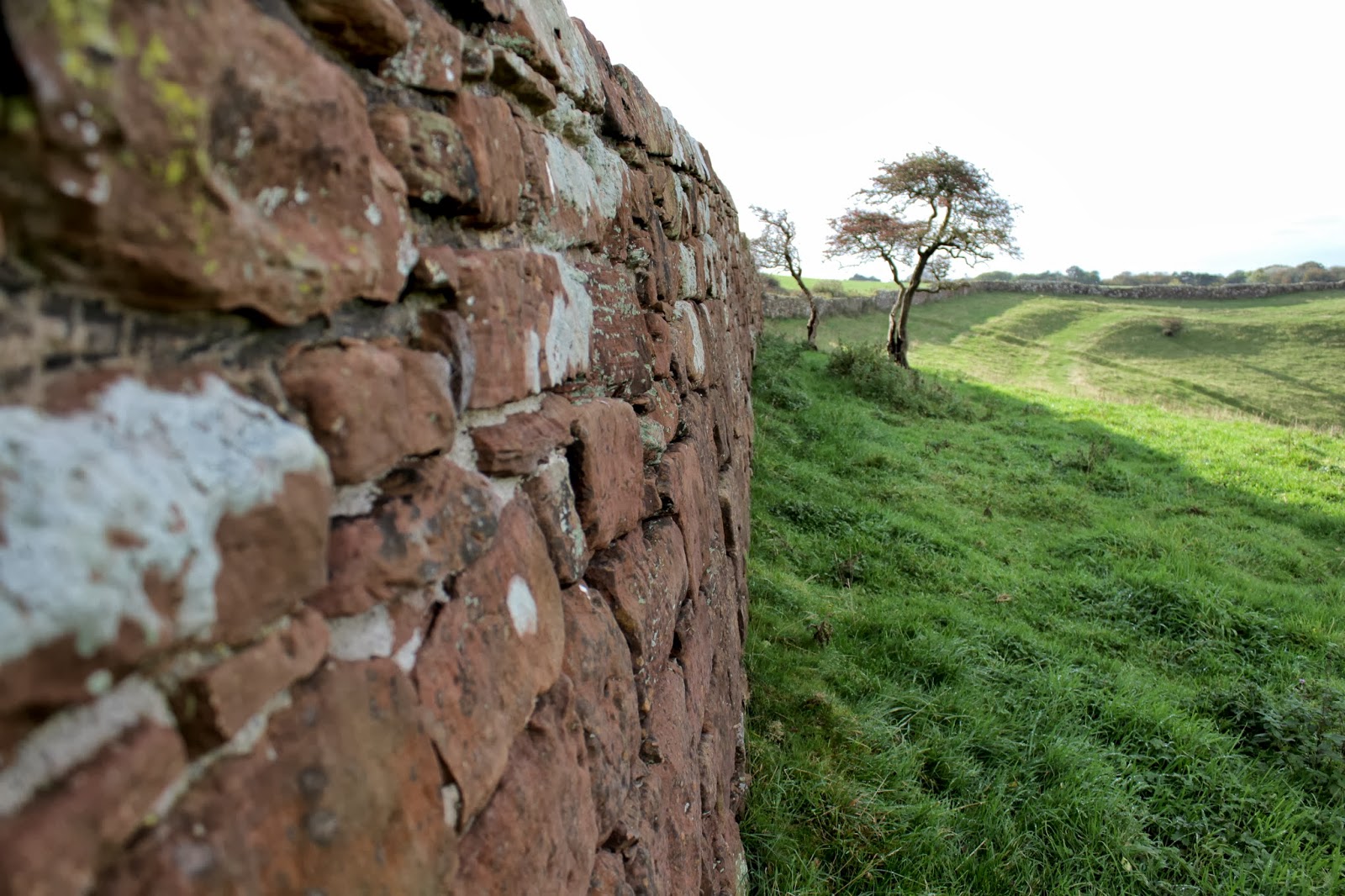 One of the most notable features that can be seen stretching across the top of the Amphitheatre is the impressive Abbey precinct wall. This wall, built of the same red sandstone as the Abbey, marks the limit of the main religious precinct. To gain entry beyond these walls in to the precinct required vigorous checks and not any old person was allowed in! Over by the Abbey car park there are the ruins of a three gate, gatehouse, which any visitor would have to pass through one gate at a time. In Medieval times the floor of the Amphitheatre would have been littered with various Abbey ancillary buildings including a brewery and bake house. Unfortunately any evidence of these buildings on the surface has been destroyed when the area was flattened for a rugby pitch many years ago. Who knows what buildings could be hidden beneath the surface! 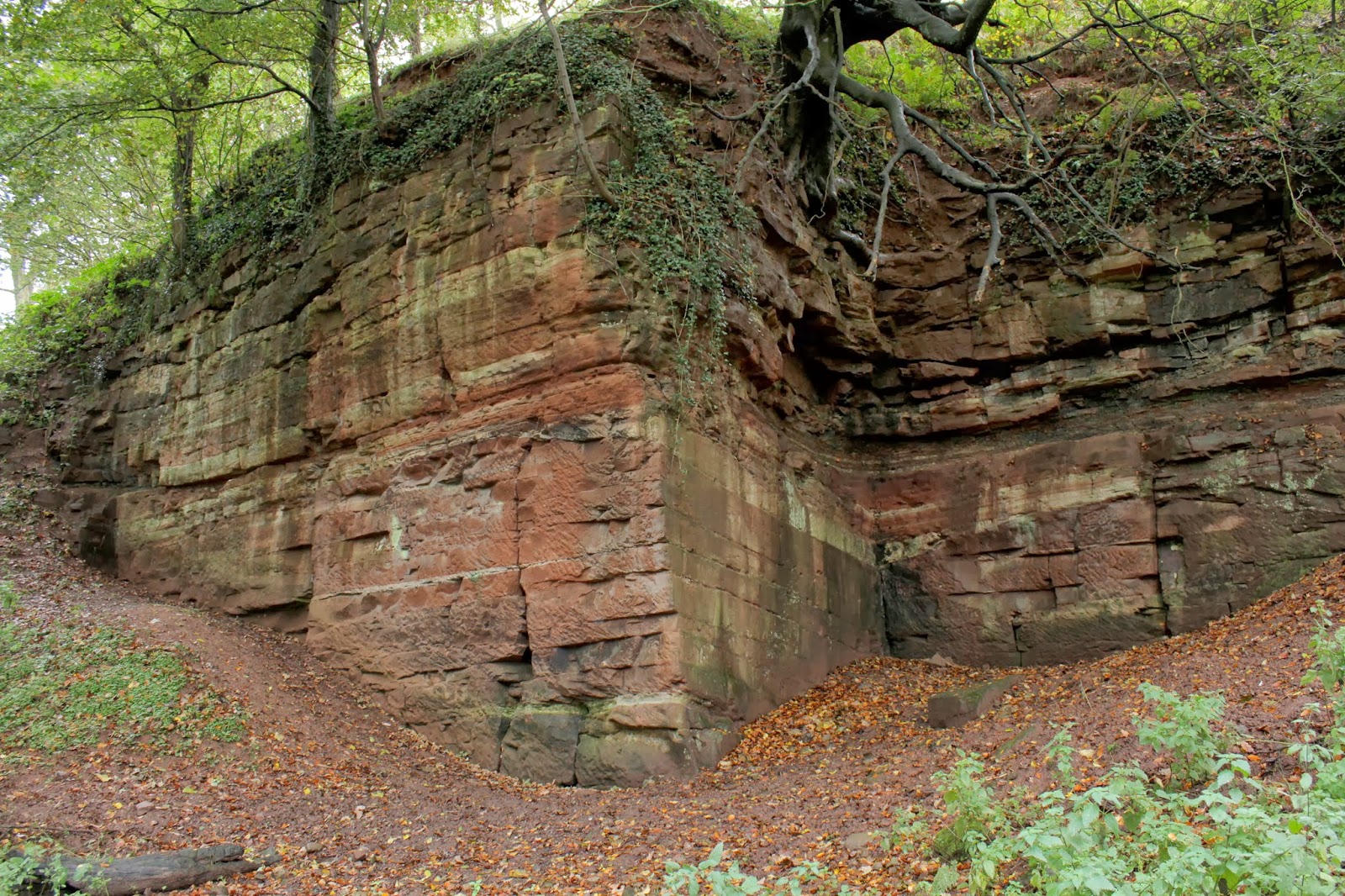 As mentioned earlier there is another area of trees on the right of the Amphitheatre, just next to the Abbey. Within these trees can be found the chisel marked stone faces of another Medieval quarry! As the other quarry the monks would have cut the sandstone from these rocky out crops and take them to the Abbey for use in the walls. The amazing thing with this quarry is that you can still see the chisel marks from the Medieval quarrying clear as the day they were first cut. It really is quite brilliant and gives a real connection to the past! Also with in this quarry you can see two heads carved into the soft stone. These carvings are believed to date back to Medieval times also. One is in better condition than the other but they can both be seen clearly amongst the chisel marks. Leading away from the quarry are the remnants of a track way used to drag the stone from the quarry down to the Abbey construction site. The track splits through the landscape heading down to the current road and is easy to see amongst the trees. These little hints of the early days of the Abbey are wonderful and personally they are some of my favourite things to look at as there is such a strong connection to the people who worked so hard to build the Abbey! 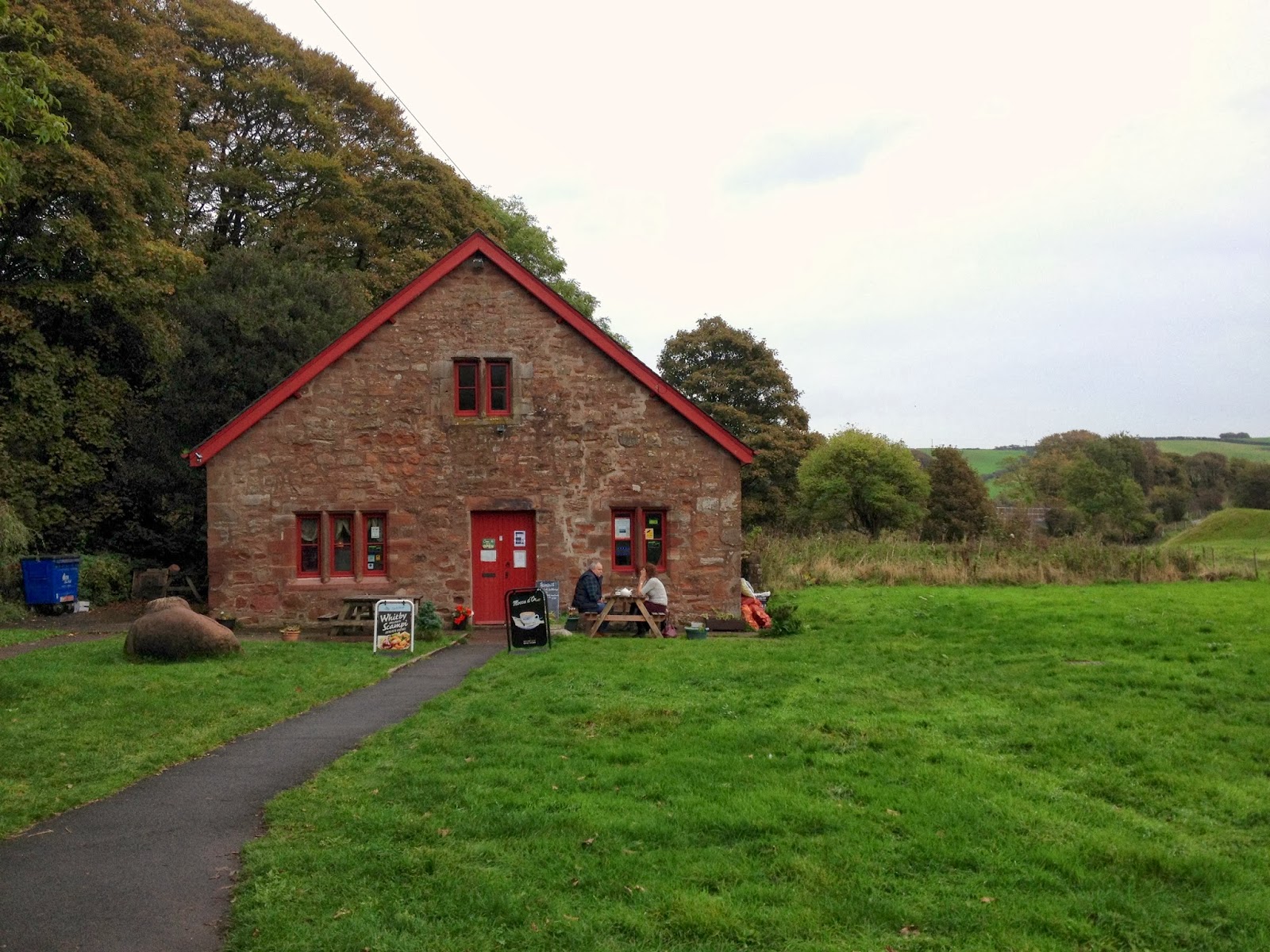 The Abbey Mill Cafe, previously the Custodian's Cottage, is a well used and well loved place but in the days of the Abbey the building would have looked a lot different. This building was constructed in the Middle Ages and was one of the ancillary buildings of the Abbey. On both sides of the building at ground level you can see window frames and door frames half covered by the earth. The whole cottage has sunk 4 feet into the ground since the structure was built, much like the Abbey has. This is due to the fact that the Cottage and Abbey were built on once marshy land so the weight of the structure on the damp ground pushed the stones down leaving the building as it is today. Inside the building you can also see where the original second floor would have been, now a couple of feet above the floor. 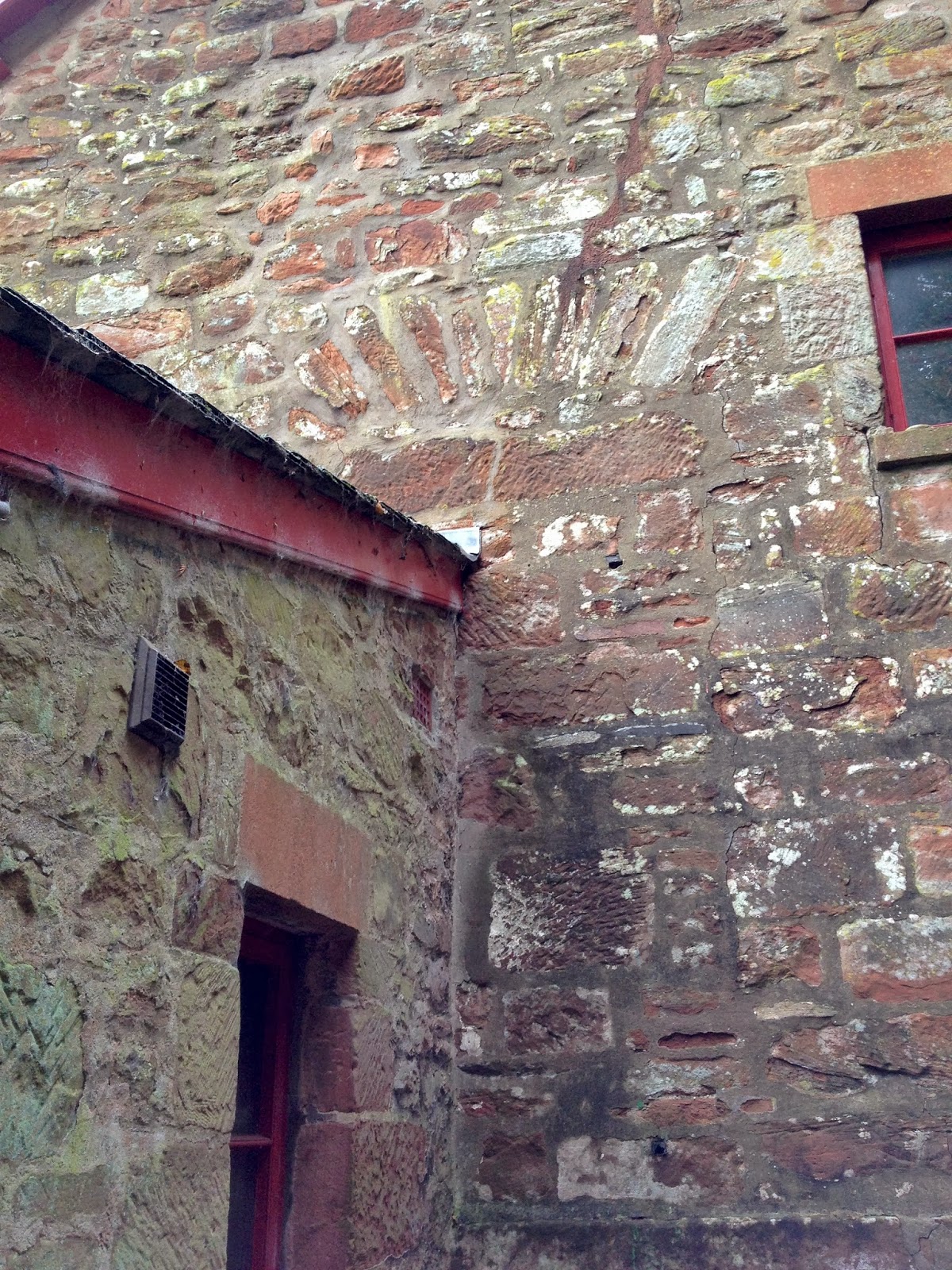 It is often thought that the Cottage was a mill but this isn't actually true as there is no evidence to point to this. It is currently believed that it would have been the Lay Stewards Hall, a much more significant building. The Lay Steward would have looked after the financial aspects of the Abbey. Evidence points to the cottage having once been a much bigger building. Remains of door frames at the second floor level suggest that the building would have extended out further to the rear and to the front. It is theorised that it would have been three times the size it is today creating a longer rectangular building. Hidden under the earth around the Cottage is a blocked watercourse, which could once have put the building on an island! Man hole covers in the grounds give an idea of the direction of this watercourse.


To the rear of the building amongst the long grass is a large, low, arch. This arch is thought to have been erected in Victorian times. No one is sure what exactly it was for but it may have just been a garden feature, made to look 'pretty'.

Across the railway tracks from the Custodian's Cottage is a large field split down the middle by the ruined precinct wall. Outside of the precinct wall is Bow Bridge, a 15th century construction used to cross the stream, but inside the wall is the site where the Abbey fishponds would have been. Look closely in the base of this field and you can just about see some faint earth works, these are thought to be the remains of the fishponds. After heavy rain this area can often fill up with water amongst the earth works. Fish was a large part of the monks diet as meat was generally forbidden (accept for certain occasions) so breeding fish on site was a very useful thing to do.

There is such a huge amount of hidden heritage in the area surrounding Furness Abbey that it is difficult to compile it all into one blog post, this post has looked specifically at the Amphitheatre but there is so much more to see in other areas. Hopefully in a later post we shall look at the other areas so keep an eye out for that.

The next blog will be online on 26th November and will take a look at Ulverston Canal, until then why not go in search of the sites we have written about here? Let us know if you find anything we may have missed!


Images from around the Amphitheatre: