Steps for Fairies? The Fairy Steps of Beetham

If you go down to the woods near Beetham today you're sure for a big surprise... Fairy Steps!

Situated at the top of a hill, amongst the woodland above Beetham are these interesting and somewhat cute steps. Rising up through a tight gap in the large rock face are what is known as Fairy Steps. The steps are known as such due to a legend that surrounds them. The legend being that; if you climb or descend the steps without touching the sides of the narrow gully the fairies will grant your wish! A tantalising prospect, sadly though I doubt anyone has ever managed to achieve the challenge to verify that the fairies do indeed grant your wish. In reality the steps were used for something little different and somewhat macabre.

The route, now a footpath, which Fairy Steps sits on will start to give you an idea of what it's original purpose was for, it sits on the 'coffin route'. 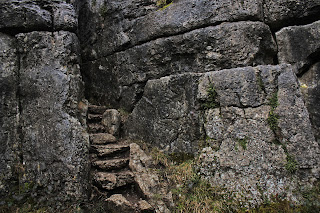 Before 1866 when a church was built at Arnside the town was part of the parish of Beetham, this meant that those wishing to attend church would have to scale Beetham Fell.

To do this they would follow paths and tracks up the hill then clamber up the Fairy Steps, most likely having to breathe in tight to squeeze through the tight gaps in the fissure the steps ascend through (the gap is not much bigger than a foot in several places).

The fact that Arnside was in the Beetham parish also meant that the dead would have to be taken over the fell to be buried in the church also. This meant coffins would be carried up the hill and then lifted up to the top of rocks at Fairy Steps. This was done using ropes and pulleys attached to metal rings hammered into the rock. 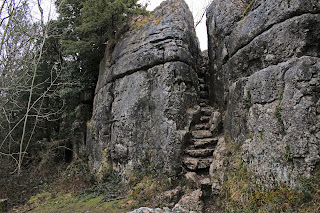 It is amazing to think that in the early 1800's men and women were scaling the heights to walk to Church on a Sunday morning. It is even more amazing to think that often they would do this with a coffin as well! Of course when 1866 came and the new Church of St James opened in Arnside this all changed and the locals of the town could now travel a less arduous journey to the new church.

Fairy Steps remained though and have been used ever since by walkers and climbers alike to reach both Arnside and Beetham or for the fun of clambering these wonderful little steps!

I highly recommend a wander up the hill from either Arnside or Beetham to see and climb these lovely little Fairy Steps, it's great fun! Why not try and ascend without touching the sides too? If you succeed do let me know if the fairies came and granted your wish! If they do I may have to go back and try harder...
Email ThisBlogThis!Share to TwitterShare to FacebookShare to Pinterest