Buried Swords and Hoards, the Vikings in Furness

The Vikings, those Norse men and women who rampaged across Europe invading countries, raping and pillaging as they went. Arriving in their long boats with their huge axes and swords to reek havoc on the unsuspecting shores on which they landed...right? Well, not quite!

Vikings is a loose term that describes Norse seafarers who traded, and indeed often raided, across north Europe from their homeland of Scandinavia. Often depicted as terrifying warriors who killed and ravaged wherever they went the Vikings were in fact a relatively peaceful bunch. They generally spent time trading with and settling in areas of Europe. Of course violence would often occur but they were not the blood thirsty race which is often depicted. They were no more violent and bloodthirsty than the later English kings of the middle ages or indeed the Celts and Romans before.

There is huge amounts of evidence of the Viking occupation across England from the remains of their capital city, Jorvik in York to the vast amount of hoards and artifacts discovered from the time. When it comes to Vikings in Furness though evidence gets a little bit sparse and discovering their occupation a little bit tricky!

One of the main things that shows some Viking influence in the area is the name of 'Furness' itself. It is believed that the name derives from the Viking 'Far Ness', ness being Norse for headland. This most likely in reference to the area as seen from the south of Morcambe bay.

There are also many place names in the area which derive from the Vikings and the old Norse language. Scales, Sowerby, Soutergate, Roa, Hawcoat, Bigger and even Barrow all have Norse origins. Places like the Haggs in Dalton also come from Old Norse.

Some of the more physical evidence of Vikings in the area are small in number but do certainly paint a picture: 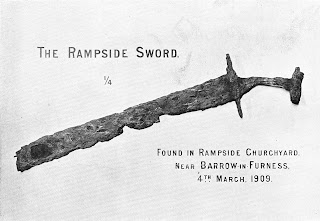 Around 1854-5 a gravedigger at Rampside Church, named William Jackson, was digging a new grave. While doing so he came across what was a well corroded but very obvious sword. It was about 12 inches long with a 3 inch guard as well as a handle. Sadly it had no pommel but was believed to be of Viking origin.

Later, in 1909, another sword was discovered buried beneath the ground. Jacob Helm and his son Thomas were digging a grave in the churchyard when they made the discovery. It lay about 2 feet 6 inches beneath the surface and had about 6 inches of the blade still intact, although about half missing. It bears a guard, handle and part of a pommel (see image) and is of typical Viking design. Interestingly this sword, in difference to most other swords of the time, only has one edge.

Both these finds suggest Viking settlement here in Furness with accompanying burials. The question however is whether these burials took place in the early Viking age or later when Christianity started to take hold. It is believed that the owner of the second Rampside sword may well have been a converted Norse man and was buried in consecrated ground around an early christian church.

In 2011 a local metal detectorist made a fascinating discovery in the hills near Stainton, a Viking Hoard!

Buried beneath the soil next to a large limestone rock (quite the marker) was a large selection of silver coins, ingots and arm rings all from the Viking Age, 92 pieces altogether.

In it's time the hoard was likely worth around 50 sheep, which was a high sum. This could give reason as to why it was buried.

Although no-one can ever be sure why it was buried, and what happened to the owner, there certainly are some theories. One theory is that this was the personal bank account, as it were, of a local person. The money buried under a marker so the owner knew where it was when needed but it was kept safe from thieves. This could have weight as the hoard was buried close to an ancient area of settlement, maybe a local would dig up the hoard every now and then to add more coins to it. The Viking equivalent of a savings account! Personally this is my favored theory although we will no doubt never know the truth.

The hoard is often described as the "missing link" as it sheds new light on Viking habitation in the area and is an extremely important find.

If you want to see the hoard yourself then you can! It is on display in the Dock Museum, Barrow. It is well worth taking a look at and pondering how it came to be buried beneath the earth and forgotten about all those years ago!

Metal detectorists have been responsible for a couple of other interesting Viking finds in the area too.

Two lead weights have been found across Furness, the most recent being beautifully decorated (see image) and found near Dalton-in-Furness. Lead weights like this were used to weigh out goods before sale and show that there was certainly Viking trade happening in the area.

The other weight found is decorated in a celtic knott work design with gold finish. Another fine example and another piece in the puzzle.

Both weights are on display, with the hoard, inside the Dock Museum. 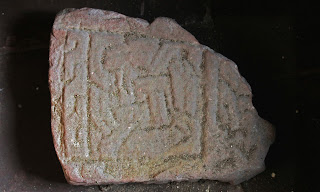 There have been several Viking stone carvings found in the area including a tympanum, a semi circular shaped surface which would sit over an entrance, found at Pennington Church, which was adorned with runic inscription dating to the Viking age and the segment of a cross found at Urswick Church. This fragment (pictured) was found in the grounds of the church and is a small section of a Viking cross and could indicate early Viking religious activity.

This fragment is still retained inside Urswick Church but is not on display to visitors.

There have been other, smaller finds, over the years also from a hollow copper alloy head found near Furness Abbey, believed to be an early religious decoration which would adorn a chair, to various Spindle whorls, the weighted bases of wool spinning tools.

All of these finds, although few in number, start to paint a picture of the Vikings in Furness. The evidence of their place names surviving through time to influence our modern world, the small finds which give evidence of their trade in the area and their lost and forgotten hoard which shows the Viking way of life had spread to the area. Whether the owners of these items were actually of Norse decent may never be known but whoever they were they certainly had adopted the Viking way of life.

So, were the Vikings ever in Furness? You can be certain they were! Let us hope though that in time more work is carried out and new evidence is discovered which will fill in the gaps and complete the puzzle of the Norse men in Furness...

On the outskirts of Ulverston there is a small village by the name of Newland, it is a quaint little place with some lovely cottages surrounded by fields, a typical country village. But at the heart of the village is something with a much more industrial past, Newland Furnace! 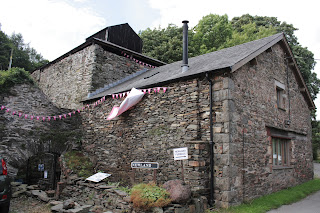 This remnant of the areas industrial past was built in 1747 as a charcoal fired and water powered iron furnace. Charcoal was used as the fuel to create the fire and heat needed to melt the iron ore while the water would power a large water wheel which operated large bellows. These bellows would be brought up to let air into them then pushed down to release the air through a small exit into the bottom of the furnace. This would feed the fire with oxegen to get it hotter and hotter. 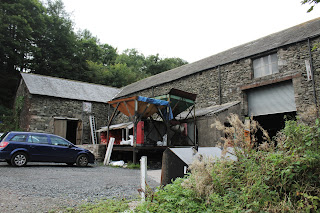 During its working life the furnace was producing 28 tonnes of iron each week, an incredible amount, and to produce that amount it required an even greater amount of charcoal. 56 tonnes to be precise. This meant they required a large barn to store the charcoal and you can see this in the picture to the right. This is always the interesting thing about these industrial sites, they often supported other industries in the area. Here they would have been a life line for the local charcoal burning industry, such large quantities being required each week would have provided healthy work for the men in the woods with their burns. It does make you wonder how fruitful that charcoal industry was once these types of furnace closed.

Newland was owned by Richard Ford but had been bought on his behalf by his sister Agnes Bordley. In 1735 Ford had entered an agreement with a Thomas Rigg who owned and ran Nibthwaite furnace alongside Ford. The agreement was that neither could set up a new furnace within 10 miles of Nibthwaite, unfortunately Newland was within 10 miles. Due to this Ford had his sister purchase the site on his behalf, this meant he had not broken the agreement and could open his own furnace, which he did, and the rest is history!

The furnace was once one of eight of its kind in this area smelting iron using charcoal. Something which in later years became obsolite with the rapid use of coke, which produced a much higher heat at quicker rates. This meant that many charcoal firing furnaces either shut down or converted to coke. Newland Furnace however managed to keep operating with charcoal for almost a century after many others had converted or closed. Sadly though in 1891 Newland shut for good and became a relic of a past age of charcoal iron smelting. 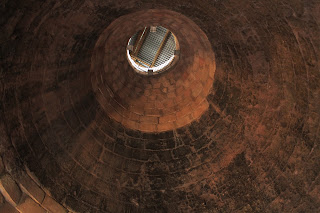 By the mid 1980s much of the site was un-used and quite a state when a selection of people were brought in to make the building safe. Many of these people took great interest in the site and decided, in 1998, to set up a trust to renovate the building, this was the start of the Newland Furnace Trust. Since then they have rebuilt the top of the furnace chamber, excavated the interior of the blowing chamber, re-boarded the floor of the large top room and generally looked after and renovated the site. In the image here you can see the inside of the furnace chamber and the clear line where the new bricks have been added ontop of the old ones. The old being blackened from the many years of charcoal fires raging around them. The work the group have done has been amazing and shows a real love for the furnace and will stand it in good stead to last well into the future.

The site is accessible from the outside and there are a few information boards to help you better under stand the building. On certain occasions the furnace does open on days like the Heritage Open Days for everyone to see inside, speak to members of the trust and learn more about this facinating building, so do keep an eye out!

Do come back on the 22nd when, instead of taking a look at one site, we will be looking at the whole of the Furness area in the Viking Age!
Posted by Furness Hidden Heritage at 10:00 1 comment:
Email ThisBlogThis!Share to TwitterShare to FacebookShare to Pinterest
Labels: 1700s, 18th Century, Charcoal Fired, Cumbria, Furnace, Furness, Furness Hidden Heritage, Industry, Iron Smelting, Newland, Newland Furnace, Water Powered
Newer Posts Older Posts Home
Subscribe to: Posts (Atom)