Links to Furness Abbey, the Old Courthouse and Church at Hawkshead

Sitting on the edge of a field to the north of the village of Hawkshead in the Lake District national park stands the Hawkshead Old Courthouse, once used by the monks of Furness to dispense law and justice on the local community.

This lovely little building is now all that is left of a once larger complex of buildings which would have formed a quadrangle and have been a manorial farm. What remains is the gatehouse, which allowed access to the central courtyard, and the courtroom above the gate.

The building is relatively basic in design with minimal decorative features. The ground level has several arrow slit windows, this does hint at an eye to defence when the building was built, something the monks would be aware of with the ever present threat of Scottish raids. The upper floor however has larger windows with more decorative tracery. These larger windows would allow more light into the courtroom inside. To the front of the building there are a few decorative features. At the top of the archway leading under the building there is a wonderfully carved feature with a floral design. Above this, set into the wall, is a finally decorated niche above a lions-head corbel. The niche would have once held a statue depicting the Virgin Mary, the Saint which Furness Abbey was dedicated to.

The Courthouse would have been used in the Middle Ages for the Steward of the manor or the Abbot of Furness to meet the local tenants and listen to their issues and receive their rent. It would also be used to settle any disputes and dispense justice on those who have broken the law.

In 1932 the National Trust was given the ancient monument and they still look after it today. You can visit the site easily, viewing the architecture from the outside. To enter inside you can get the key from the National Trust shop in Hawkshead, provided it is open at the time.

The Courthouse is a quaint and lovely building to visit and is certainly worth a look if you are in the area!

Not far from the courthouse is another site which was related to Furness Abbey and has a Medieval origin, Hawkshead Church.

This pleasant church sat atop a rise, overlooking the picturesque Lakeland village of Hawkshead is somewhat different to how it looked many centuries ago but once it was an outlying chapelry of Furness Abbey.

The Abbey of St. Mary at Furness Owned much of the land around the now Lake District and held the lands of Hawkshead, this meant that they required a manoral court as spoken about earlier and a chapel for any lay brother working in the area to worship in and for any choir monks visiting the area to do the same.

The original chapel was built in the 12th Century, when the abbey was starting to take hold as a powerful entity, but was later enlarged, in about 1300, to the length it is today and later still, in the 1500s, widened with the addition of two side isles. This brought the church pretty much to how it looks today. In about 1578 however the church became its own parish, this followed the dissolution of the monasteries which had seen, in 1536, the demise of Furness Abbey. 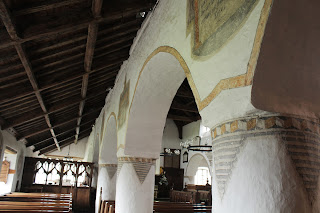 If you were to visit Hawkshead Church, which I strongly suggest you do, you will notice exquisit paintings adornin the interior walls. Passages of scripture beautifully hand painted with flourishes lining the large rounded arches. These paintings are from the 17th Century and were painted by a man called James Addison of Hornby, near Lancaster. He was invited to the church in 1680 to "peint 26 Sentances of Scripture ... and to border and florish them". These painting were sadly covered with a whitewash in the late 1700s but luckily were re-discovered and revealed in 1875. They still remain on the walls to this day and are wonderful reminders of the churches past.

These two sites are fantastic and are truly linked to the Furness area. They are well worth visiting, as is the rest of Hawkshead, and give you a sense of the areas Medieval past!