It's been a while since I last posted here, I’ve had a lot on outside of Furness Hidden Heritage so haven’t had much time to produce any new content.


Having said that though, I thought it was high time I did post something and decided it now might be a good moment to release a selection of new videos I have been working.

The 'One Minute Histories' series showcases different sites and artefacts in Furness in short one minute videos. I currently have four videos in this series but hope to have more in the future.

Watch the videos in the playlist player below:


There are only two videos currently release, another two are scheduled for release over the next couple of weeks, so do check back.

Heading up the west coast of the Furness Peninsula you will find the lovely little village of Kirkby-in-Furness and with it the church of St. Cuthbert.

The origin of this church can be dated back to the Norman period of British history. The town of Kirkby is mentioned in the Doomesday book of 1086 with the name Cherchebei. This meant 'Village by the Church' which strongly suggests that there must have been a church here at this time. When exactly a church was first established here though is unknown.

Inside the church there are two chests made of oak, which are believed to date to an earlier Saxon church. The tree rings found on the wood have been dated to the Saxon period and this certainly gives substance to the theory. Whether they are from an earlier church on this site though or whether they were simple brought to the church from elsewhere we may never know.

The current church building is a mix of various stages of construction and restoration, as one would expect from a church of its age. The entrance doorway is a fine example of a Norman arch, which is believed to date to the 1150s. The use of lovely red sandstone for the arch making it stand out from the grey stone surrounding. Certainly an impressive entrance. 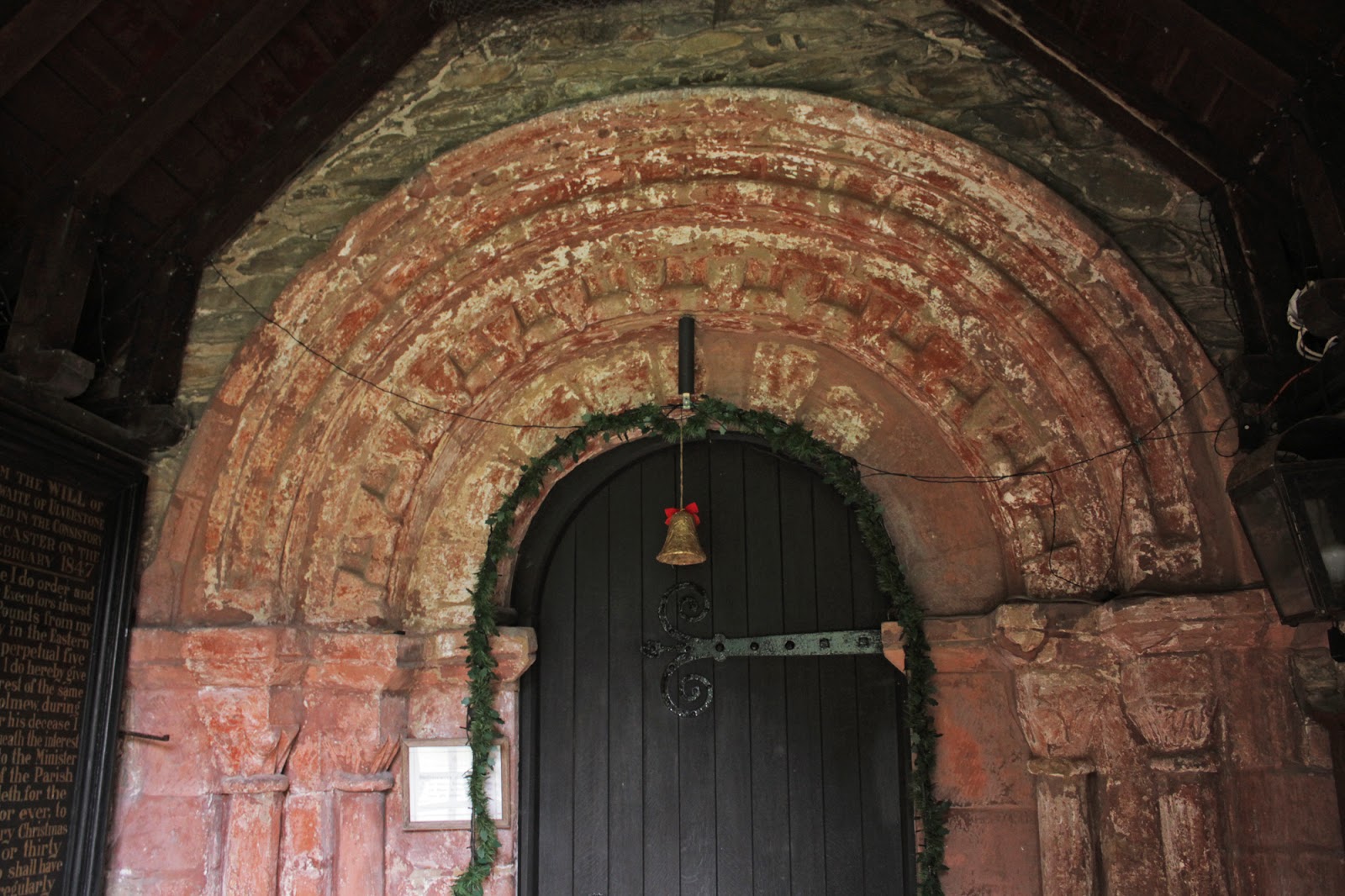 The main body of the church that stands today is thought to have been constructed under the orders of Sir Rodger de Kirkby sometime in the 15th Century. The de Kirkby family had been the lords of the manor in this area for many hundreds of years.

The tower of the present church, sadly, is not the original. In 1657 the church bells were being rung for the Sunday service when disaster struck. The tower gave way and fell to the ground damaging all but one of the bells inside. It must have been awful when this happened and I do hope the bell ringers made it out alive and unscathed.

During this incident two of the three bells that hung within the tower were damage beyond repair.

Many of the church windows, as well as much of the buildings interior, were restored or replaced in the 1800s, leaving the church in the state we see it today.

This lovely church is full of character and is a wonderful addition to the catalogue of churches found across Furness. If you are ever in the Kirkby area, do go and have a look. 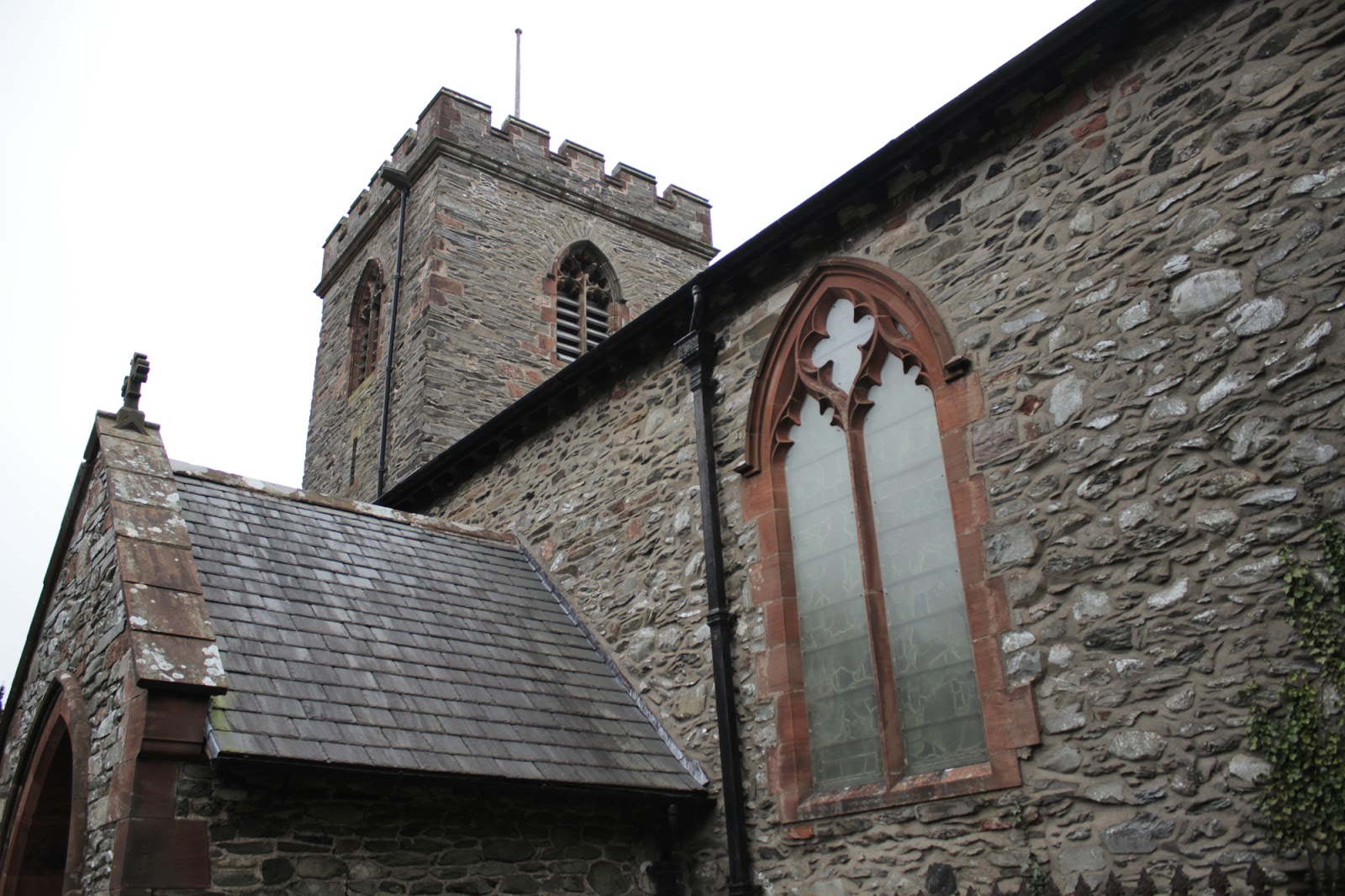 The Churches of Furness Series does what it says on the tin, it takes a look at the many and varied churches of the Furness area of South Cumbria. From churches with Norman origins to Victorian houses of worship there certainly is an array of religious buildings here!

Perched beside the gravel beach on the east coast of the Furness Peninsula is the rather lovely Aldingham Church. 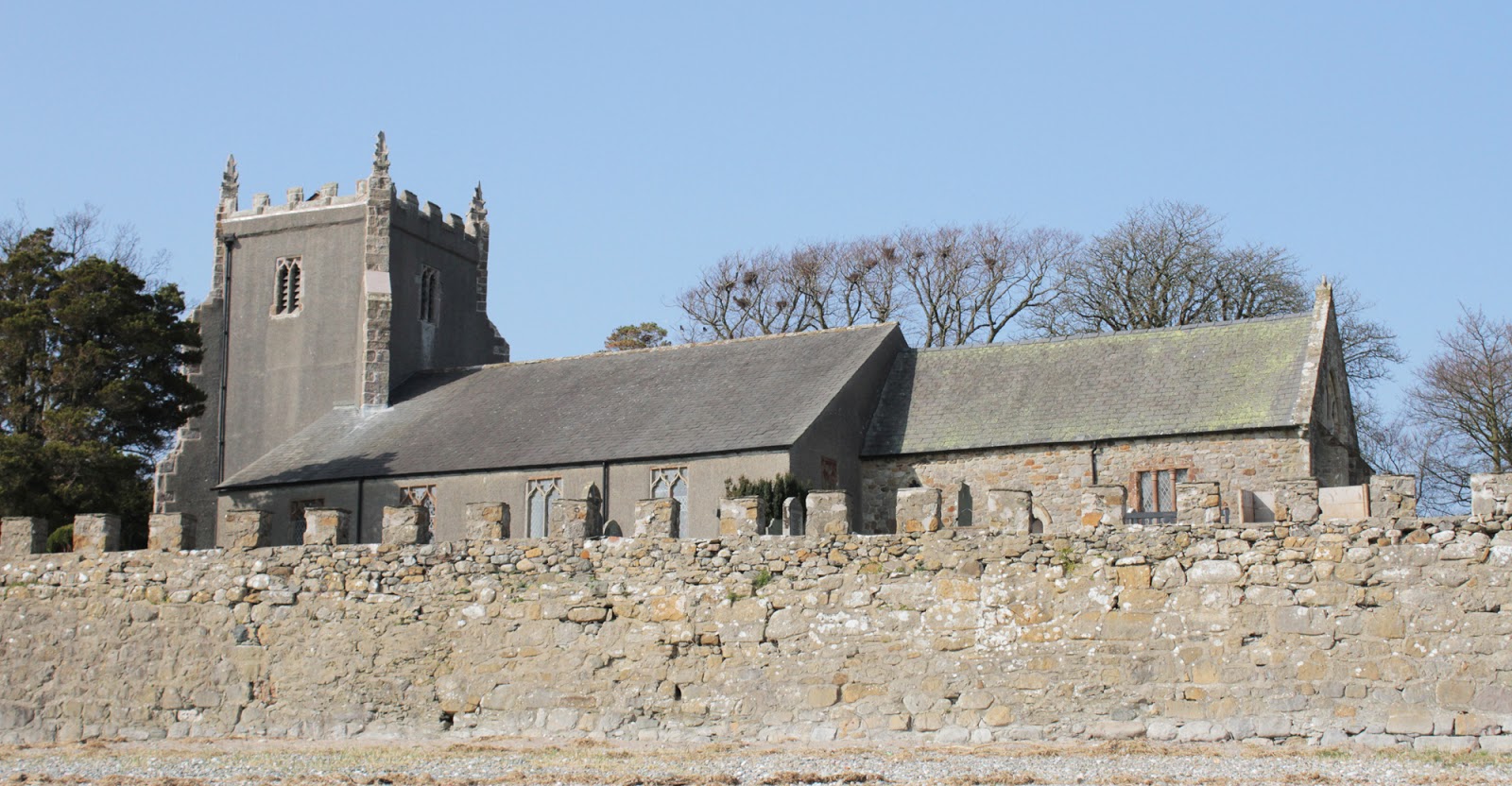 Aldingham Church, or St. Cuthbert's to give it it's proper title, has quite a long history with parts of the church dating back to the 1150s (the Norman period).

On entering the church you are first struck by the large arches that run on either side of the Nave. Both sides are built in different styles to match the period they were built. The right hand range is built in the later Gothic style with the left being the more ancient Norman design, with its semi-circular arches. These are remnants of the original Norman church, most likely constructed under the order of Michael Le Fleming who was lord of the manor. It was Michael's son, Daniel, who became the churches first rector in 1180. 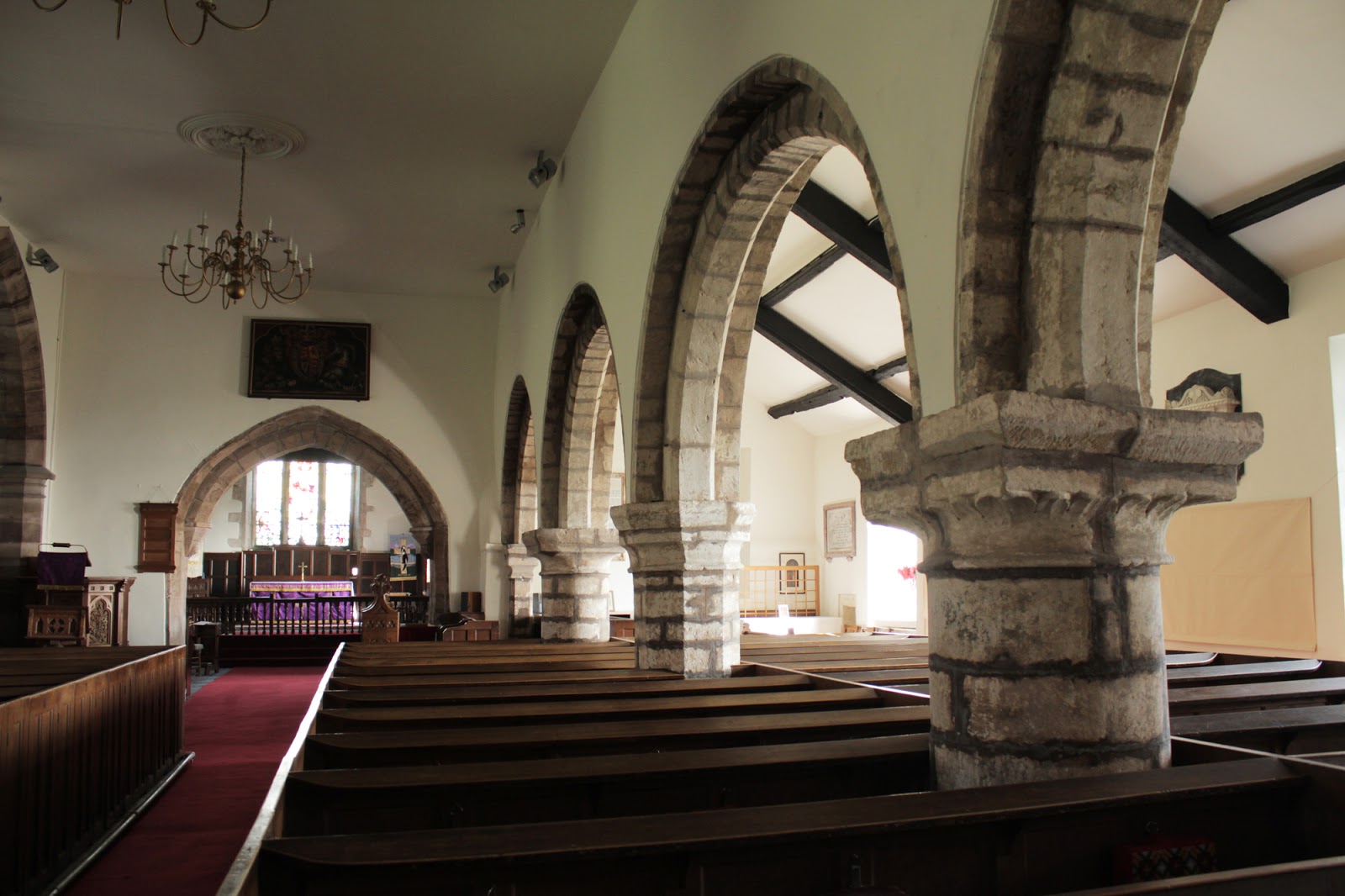 The present church has been extended and altered several times over it's life. In the 13th Century the chancel was extended to form it's present state. A large arch providing entrance from the nave. Interestingly this archway is off to one side. This was done intentionally to represent Jesus with his head leaning, one presumes during Crucifixion.

It is worth taking a closer look at this arch also as at the base of each side are some wonderful medieval carvings of a woman and man.

Moving into the chancel there is another interesting feature. Off to the right behind the alter there is a small hole in the wall that reveals the outside. Is this some damage yet to be repaired? Well, no. It is in fact something that was placed here entirely on purpose.

This small gap is known as a leper's hole or squint. It was created so that people with the illness could see into the church and watch a service without entering the holy building. In the middle ages they believed that leprosy was highly contagious so went to great measures to ensure that anyone suffering with the disease was kept at a safe distance. Holes like this could also be used to pass communion bread to those outside. 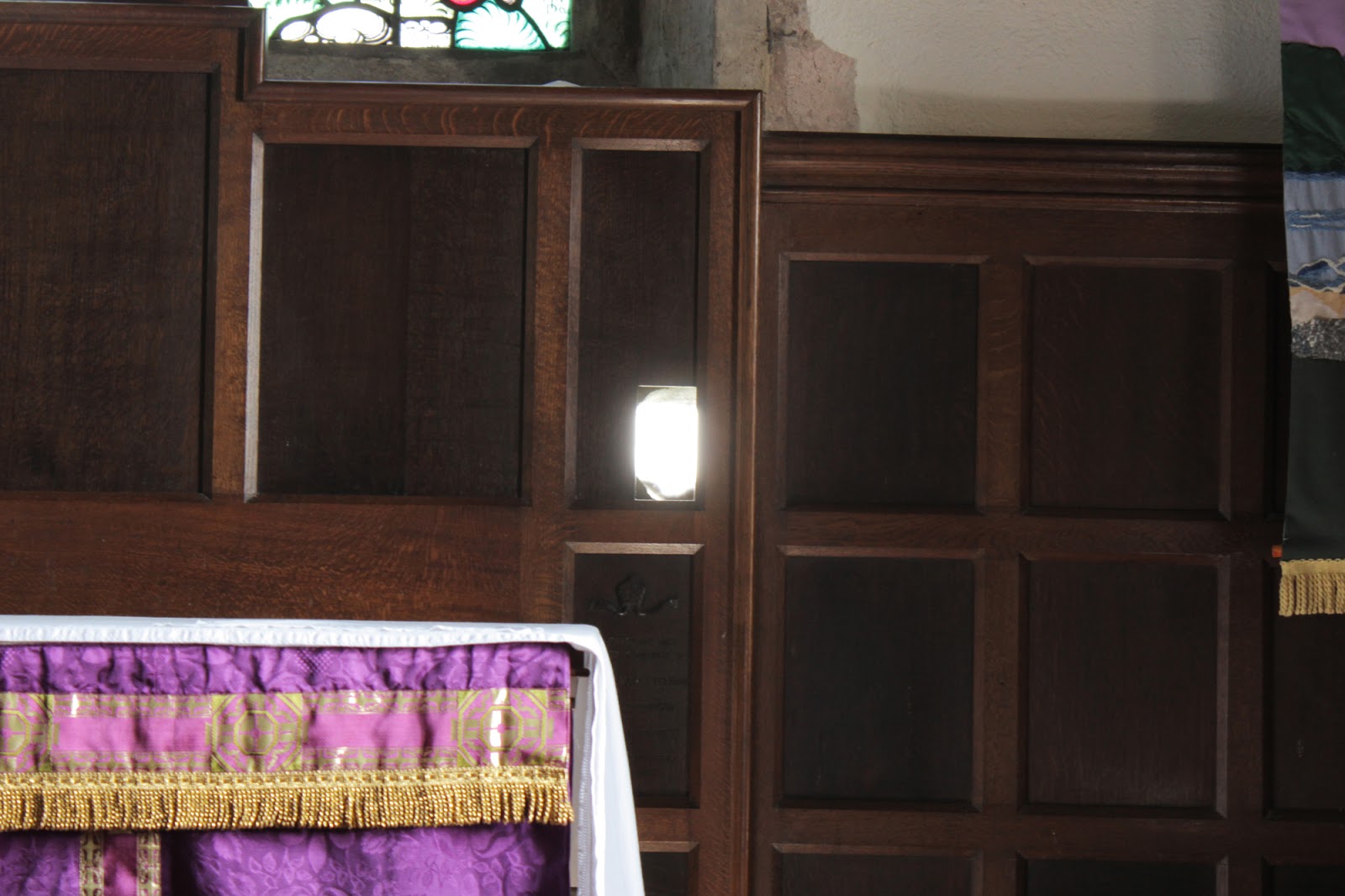 The church tower here at Aldingham was added in the 1300s and much restoration has taken place within the church since to leave it how it looks today.

You may be wondering about the name of the church - St. Cuthbert's. Why is it named after a Saint who predominantly lived in the North East in Anglo-Saxon times? Well, this could be because the relics of St. Cuthbert (his body) were rested in Aldingham when the monks from Lindisfarne were fleeing from the Danes in the East sometime in the late 800s AD. An inscription in Durham Cathedral mentions Aldingham alongside other areas where the Saint was rested.

With such an important person's body having rested in the village it is little wonder that the church was dedicated to him. There may well have been an Anglo-Saxon church here at the time (a worn section of an Anglo-Saxon cross can be found in the walls of the church which may give evidence to this) which could originally have taken up the name.

This church is a great place to visit with a wonderfully layered history. There is lots to discover, more than I have mentioned in this post, so why not pop along for a look and even enjoy a wander along the beach that runs beside the church yard..


The Churches of Furness Series does what it says on the tin, it takes a look at the many and varied churches of the Furness area of South Cumbria. From churches with Norman origins to Victorian houses of worship there certainly is an array of religious buildings to discover!