The Tale of a Man Called Wimund

There is a man from history, once a monk at Furness Abbey, who became a bishop, a pretender and a warlord. This man was called Wimund.

There are not many accounts of Wimund except for one by a 12th Century historian, William of Newburgh. William was a Yorkshire Augustinian who wrote the History of English Affairs in which he relays the ‘most audacious acts’ of Wimund in Chapter 24 - "Of bishop Wimund, his life unbecoming a bishop, and how he was deprived of his sight".

William had met Wimund several times at Byland Abbey, where the discraced bishop lived in later life, and had heard the stories of ‘his merited misfortunes’.

Wimund was of humble birth, he was no nobal man or anyone of importance. He did, however, pocess the ability to read and write, something most common folk did not. This ability lead him to find employment at the Abbey of St. Mary in Furness, then ran by Savigniac monks, as a copyist. Wimund, with his ‘competent eloquence’ and ‘retentive memory’, made speedy progress at the monastic site and was soon shorn a monk. 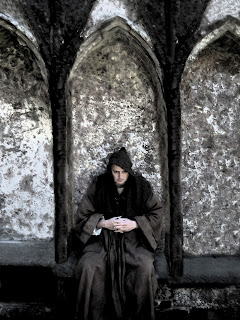 Around 1134 Wimund was sent, with a group of other monks, to set up a new community on the Isle of Man. It was in 1134 that King Olaf of the Isle of Man granted land to Furness for the foundation of a daughter house. This daughter house was called Rushen Abbey. The site is now, as many are, in ruins but can still be visited. In the same charter granting the lands for a daughter house King Olaf also gave the abbey control over the election of the new Bishop of Sodor and Man.

Wimund was a tall man, standing head and shoulders above most men of the time and he held an athletic figure. This, along with his power to produce stirring speech, brought him the acclaim of the inhabitants of the Isle of Man, who soon appointed Wimund as their Bishop with the abbey’s consent. Although he was not a popular choice. It didn’t take long for Wimunds ambitions to grow and for him to become hungry for more power.

It was then that Wimund started to convince local supporters that he was the rightful heir to the earldom of Mowbray and that he had been deprived his inheritance by the King of Scotland. These supporters pledged their allegiance to Wimund and swore to help him reclaim his birthright, they soon were engaged on a crusade against the Scottish King. William of Newburgh comments that ‘this fisher of men turned hunter of men’. The band left the Isle of Man and headed for Scotland where they engaged in battle with the Scots and successfully ravaged them. Unfortunately for Wimund another Bishop stood up to him and refused to bow to his will. With the assistance of God the Bishop drove Wimund away hurling an axe at him! This axe wounded Wimund badly, he went into hiding for a time to recover but soon re-emerged to reign more terror onto the Scots.

Soon King David of Scotland granted Wimund the lands of Furness to make him less hostile, an act known as placation. The whole of Cumberland and Westmorland had been given to Scotland in 1536 by King Stephen of England, this included Furness. Wimund paraded his knew lands with his army and this stirred up the locals, who had known him as a monk, to set a trap. Wimund was captured and 'they took and bound him, and as both eyes were wicked, deprived him of both; and, providing against all future excess, they made him an eunuch for the sake of the kingdom of Scotland, not for that of Heaven'. In other terms they blinded and castrated him, taking away his sight and taking away his ability to breed.

Wimund survived this brutal attack and spent the rest of his days living at Byland Abbey in Yorkshire. He never repented for his wrong doings and was always willing to tell his tales to anyone who would listen, often remarking that ‘his enemies should have small cause to rejoice over their work’ and what they had done to him.

Wimund’s tale is an interesting one; it shows how power can easily corrupt even those who have sworn devotion to God and to the church. Alas Wimund’s tale is not the only one of its kind within the country but it is the only one recorded that relates to Furness and it is, certainly, a piece of hidden heritage.


Return here on October 11th for a special post which puts the spotlight on Normans in Furness!