A Motte Without a Bailey and a Manor Without a Town, Aldingham

Aldingham is a small hamlet perched on the east coast of Furness, made up of a Church, some houses and a large old peoples home. Back in the Norman period though Aldingham was a much larger and important town!

1066 and Norman forces crossed the channel from France to England. They met with Anglo Saxon forces on land near to Hastings. Here they fought tirelessly until eventually defeating the Saxon army and thus conquering England. This was the start of the Norman age in Britain and saw many changes to the way everyone lived. Jump forward some 40 odd years later and Furness saw its first Norman lord move to the area, Michael Le Fleming. 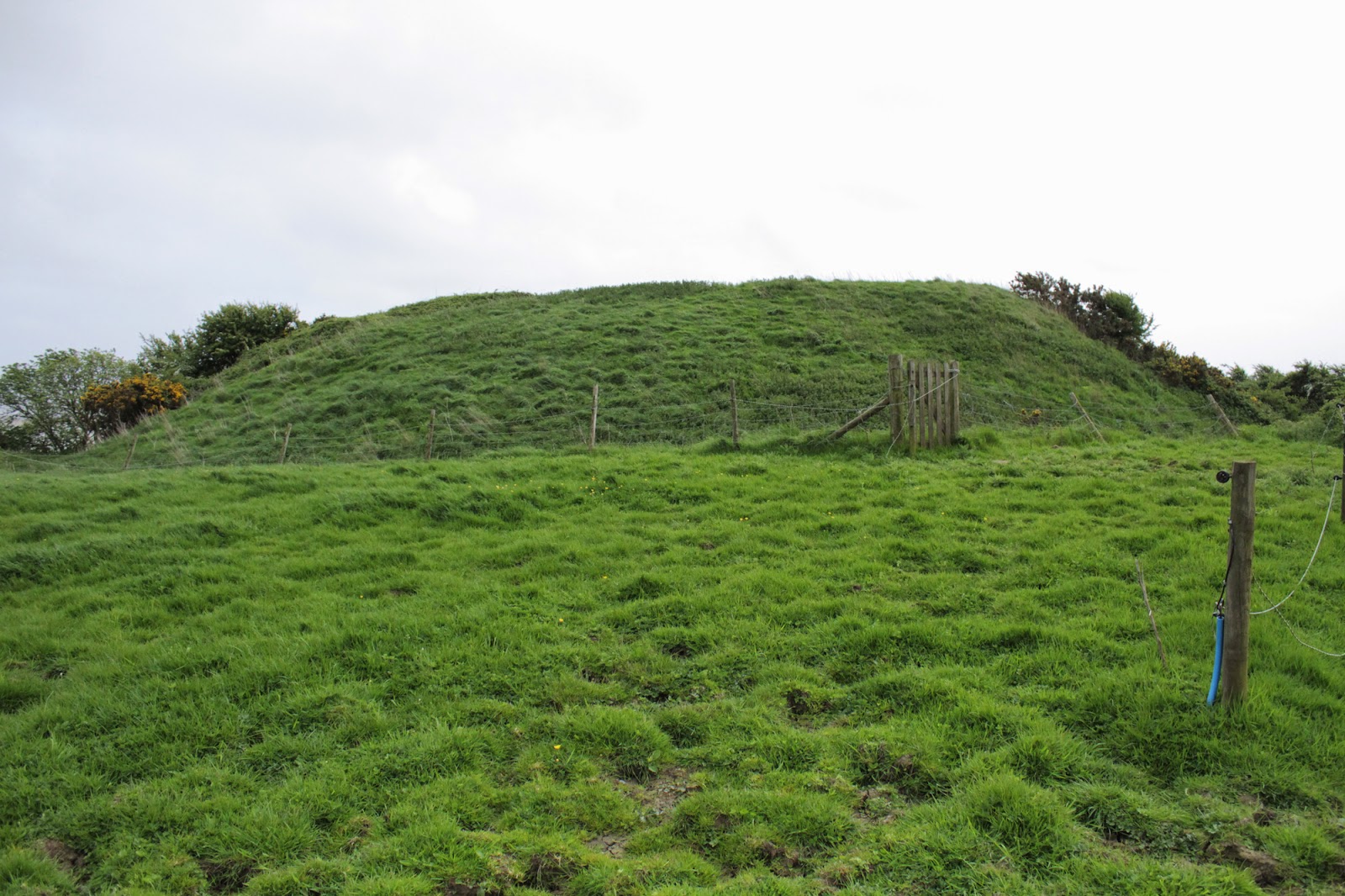 Standing precariously on the edge of a cliff face just under 1 mile down the beach from Aldigham is the remains of a once impressive motte and bailey castle. Michael Le Fleming built this castle sometime between 1107 and 1111, after King Henry I had granted him the lands lying eastward of Abbey Beck and southwards of the moors of Birkrigg and Swarthmoor. This land became the manor of Aldingham. Motte and bailey castles sprung up all over Britain after the Norman Conquest to aid in the Normanisation of the country and to keep control of the local inhabitants. Le Fleming being the first Norman lord to move to Furness must have been faced with quite a daunting task. To come to the very northwestern corner of the kingdom, an area constantly disputed by England and Scotland, a place with a mix of people from varying cultural backgrounds. There were Saxons, Norse men (Vikings) and even Celts all living in the area with out any real rule. How could one man manage to control and lord over such a place and mix of people? His new motte and bailey castle must have helped! 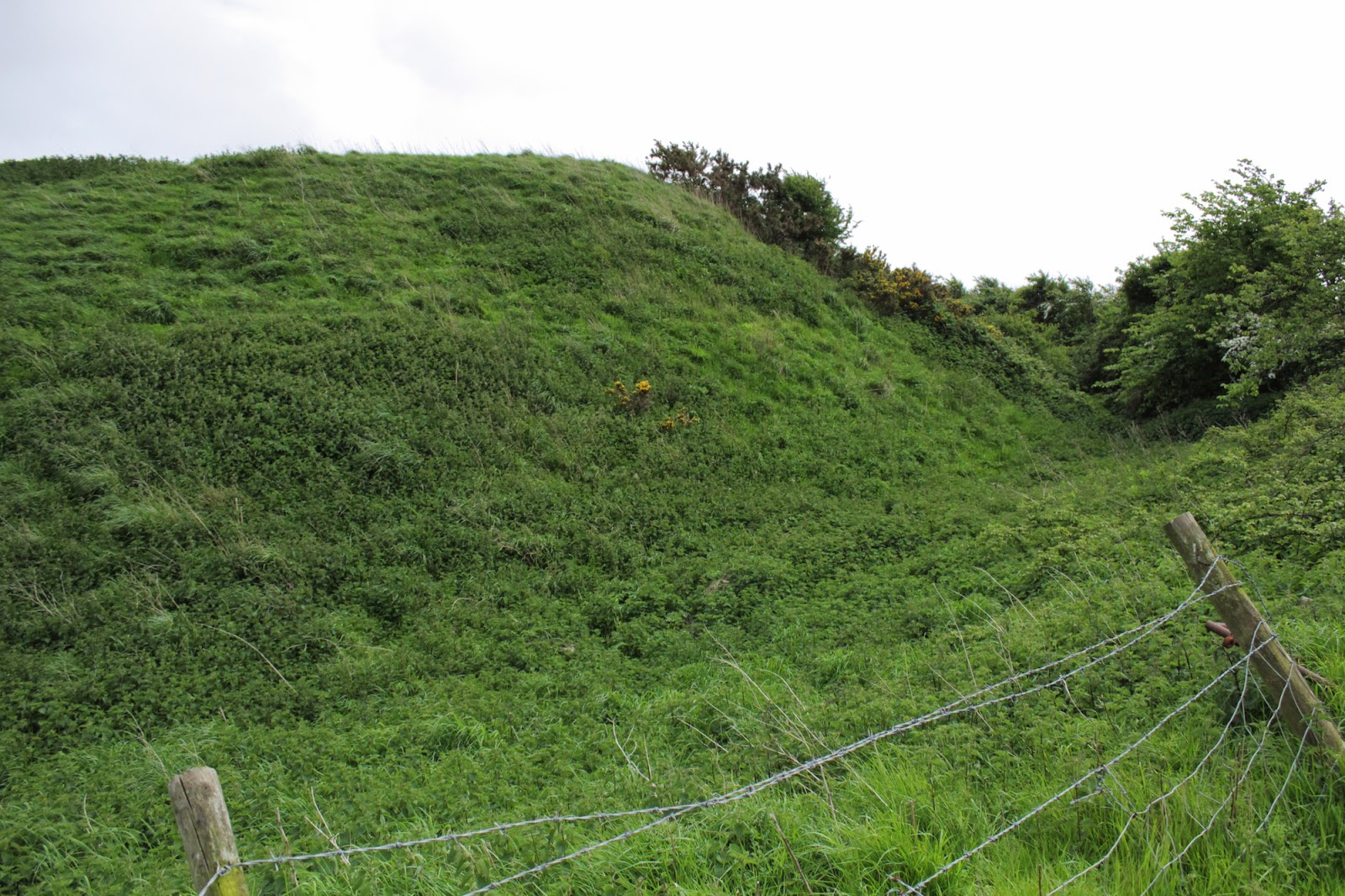 It is thought that the castle site started as a ringwork sometime before 1102, built by Roger the Poitevin, before becoming a motte and bailey castle. At the base of the current castle remains is a large ditch looping around the base of the motte. This is probably evidence of the original ringwork structure, the inner earthwork being added by the Le Flemings later. Looking at the motte site today there is something quite clearly missing, the bailey! Where is it? You might ask. Well, unfortunately, as is often the case with such sites built on the coastline, erosion has destroyed it. The bailey would have once sat next to the motte on its southeast side. With in this bailey would have been other buildings associated to the castle, like stables and storage houses. In some cases followers of the lord would live in the bailey, in the case of Aldingham it is hard to determine as it no longer exists and there aren't many records to tell us.

Coastal erosion was as much a problem in the Middle Ages as it is today and could have forced the lord to move out of the motte and bailey to another manor a little further inland to the north.

Sitting at the bottom of the hill on which the motte stands is a raised area of land surrounded by water. This is thought to be a moated manor where the inhabitants of the motte, most likely still the Le Fleming family, moved, away from the the threat of erosion. A timber structure would have sat upon the slightly raised earth mound; much like that which would have adorned the motte. A moat was dug around the mound, which was filled with water, something it is still filled with today. The moat would provide defense and there would most probably have been a timber palisade surrounding the manor inside the moat.

What is quite apparent when looking at both the motte and the moated manor is that they are pretty far away from the current village of Aldingham. Odd, yes? Well in the 12th century it would not have been quite so far away from the town. It would still be the same distance away from the church but there would have been a whole town spreading out between the two, creating the manor of Aldingham. A large and important town in the Furness area. But, much like the bailey, costal erosion has claimed the land and the town upon it. Archeological surveys have identified and excavated several middens along the current beach. A midden was basically a dumping ground during the Middle Ages. Large holes would be dug into the ground where domestic waste matter could be placed. After many hundreds of years bones, shells, grains and corns are left, which provide key dating material. These middens are some of the only evidence left of the town that once thrived here but provide an insight into the lives and diet of the people who lived there.

It is quite clear that Aldingham has had a rich and interesting history, from its motte and bailey castle to its moated manor and missing town. It is a site well worth exploring, there is a public footpath that runs up to the motte for a slightly closer look or you could walk along the beach to see it from bellow.  The moated manor is on private land but can be seen from the road and the motte. It is also well worth visiting Aldingham Church, a building that dates back, in part, to the 12th Century and has many interesting features.