A Chapel, A Hotel and A Lost Railway Station - A Walk By Furness Abbey

In our previous post Fading Faces and Medieval Quarries we took a look at the interesting features in the Amphitheatre next to Furness Abbey. In this post we will look at the other intriguing sites and features that lie elsewhere around the Abbey complex by taking a little walk. 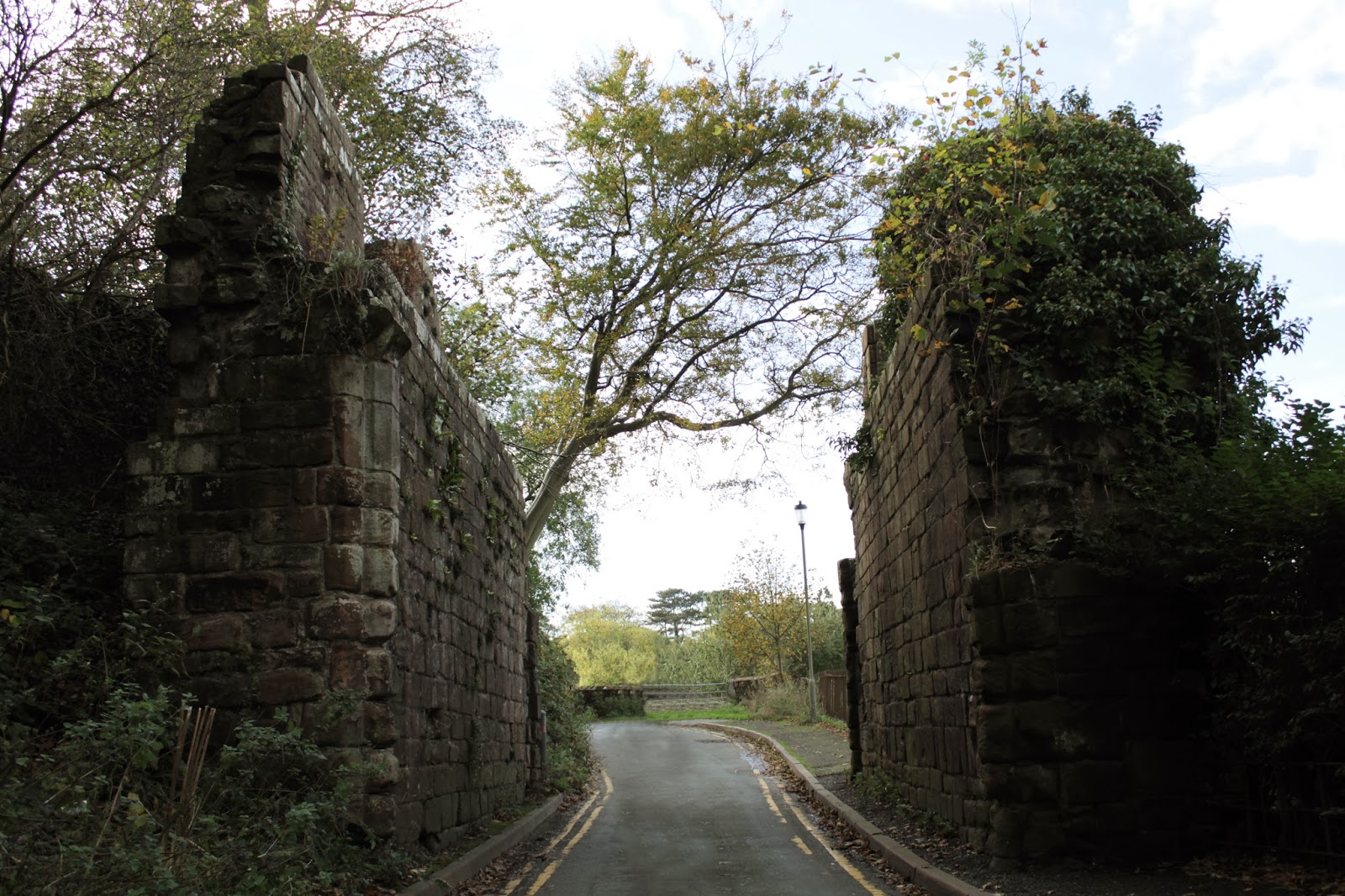 To the West of the Abbey itself is Manor Road, this is where we start our walk. As you go along Manor Road, towards the Abbey, thick sandstone walls tower up above you on either side of the track below. These imposing remains are that of the West Gate, one of but a few entrances to the Abbey complex. Looking closely at these ruins you can see the indentations where the Medieval gates would once have been. Looking up you can also see evidence of a first floor above the gates. There are spaces for windows and/or doors. Quite how one would enter the room above is unclear, there isn't any remaining stone stairs but maybe a wooden stair case or ladders were used to reach the first floor. Extending off of these impressive ruins is the boundary wall that stretches around the entire Abbey precinct. 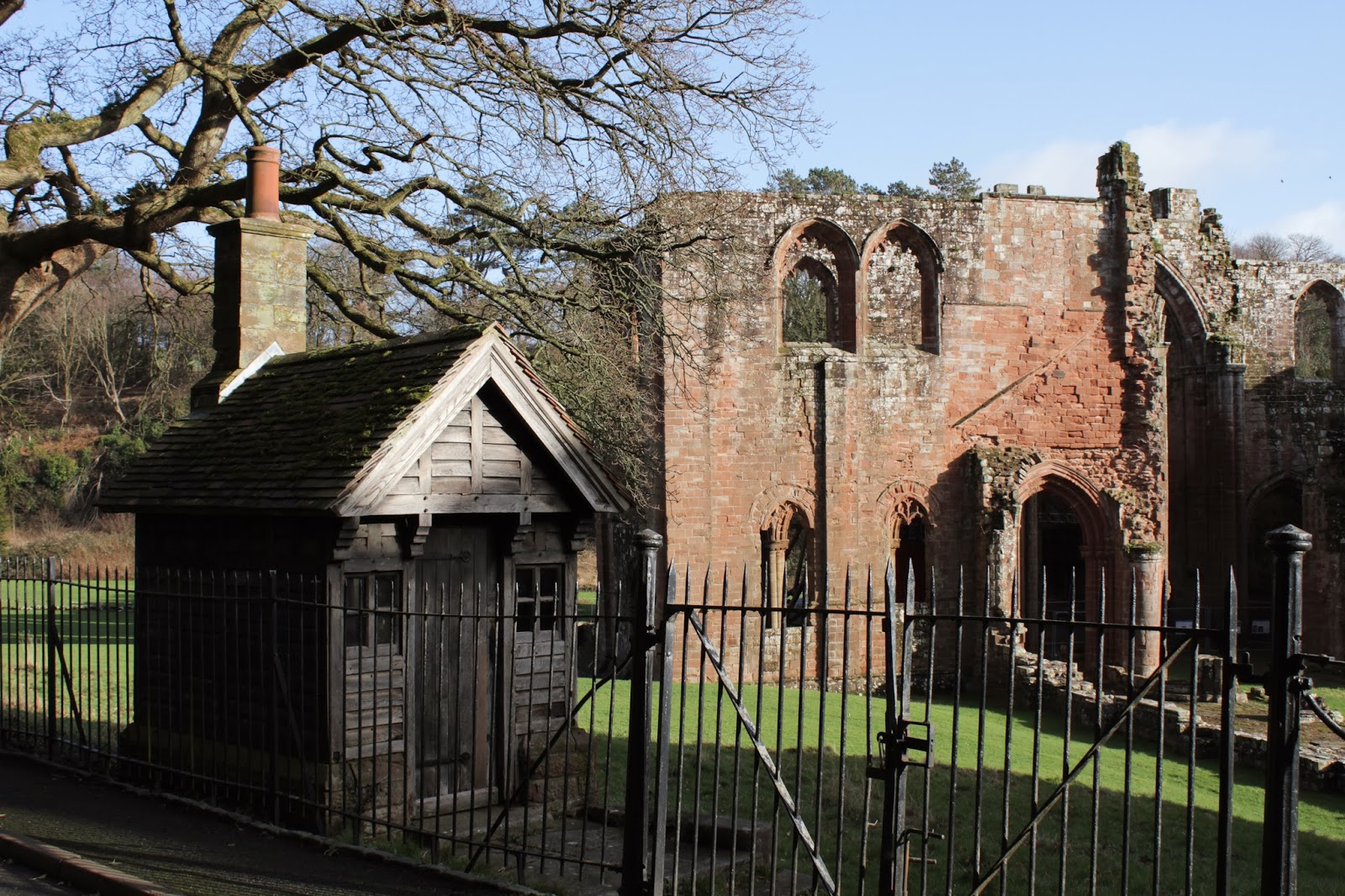 As you carry on along Manor Road you reach the Abbey itself, at this point we will take a left and walk along Abbey Approach. Not long down this road you will see a quaint little building sitting just inside the iron fence surrounding the Abbey. This is the Victorian ticket office where tourists of the period, and locals alike, would enter the ruins, paying at this office. This little hut has become as synonymous with the Abbey as the ruins. Even though it is such a small building it does have a fire place to provide heat for whoever was sitting inside, you can see the chimney on the roof giving evidence to this. Imagine what  it must have looked like with smoke billowing from the chimney as people dressed in their finery walked by into the Abbey.

Carrying on along the road you come to the Abbey car park and next to this on either side of the road are the remains of the Abbey's main gate. Although there are only low ruins left this must have been an impressive building in it's day holding several gates within. It appears as if there would have been some sort of three gate system which visitors to the Abbey would have to pass through. There are doorways between each gate presumable for visitors to leave through having dismounted their horse or left their carriage. On the right of the road, heading away from the Abbey, are the best preserved and most visible parts of the ruin but to the left, hidden amongst the undergrowth, is even more remains of this building. There appears to be at least one large room expanding away from the road which one would imagine lay people might be stationed to assist any visitors attempting to enter by this gate. It is a shame that these covered parts of the ruin aren't more exposed for us all to see but at the same time the fact they are covered could well be protecting them. It is also a shame that the modern road runs through the gate house as cars often clip the ruins causing a fair amount of damage. 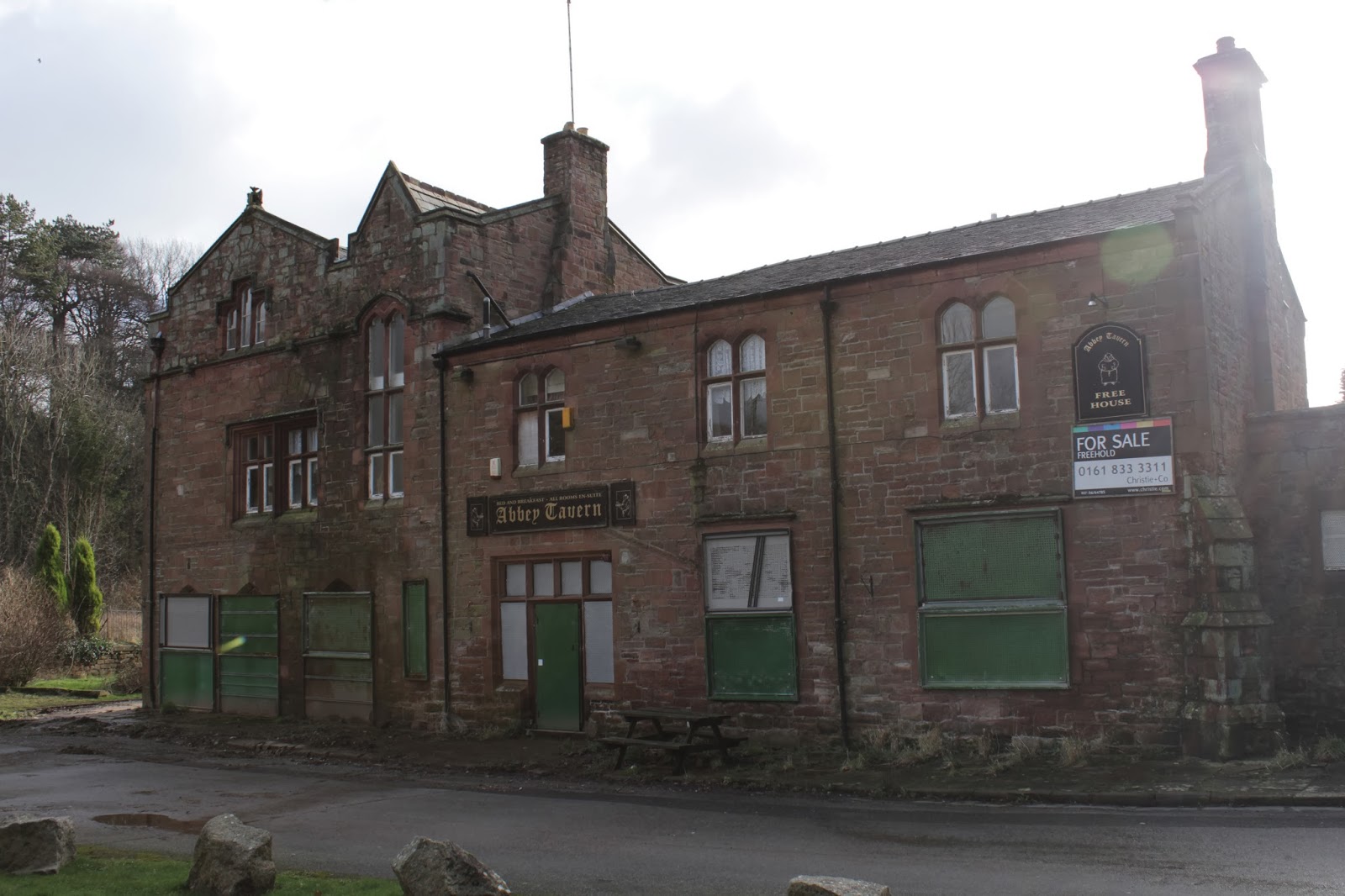 Past the gatehouse sitting next to the Abbey car park stands the impressive sandstone building known as the Abbey Tavern. What can be seen today is in fact only one wing of what was a much larger building. In the 17th Century the current building wasn't in existence but a similar looking building, although with more decoration, was situated around where the Abbey visitor centre is today. This building was the manor house of the Preston Family. The Prestons left the house by the 19th Century and it remained empty until 1847 when the Furness Railway Company bought it. In Victorian times the Abbey became a hot spot for tourism so when the Railway Company bought the building they transformed it into a hotel which was, unsurprisingly, called the Furness Abbey Hotel. In 1846 the Furness Abbey Railway Station was opened next to the brand new Furness Railway. This station was situated a few meters from the Hotel. By 1862 the Station started receiving passengers from further afield and with this the hotel was extended north to meet with the Station. The Abbey Tavern was part of this extension and was built to mirror the earlier building. The two buildings were joined on their east side by a smaller building running south. If you look at the rear of the Tavern, from the Abbey car park, you can see the roof line of the joining building which is now long gone. Both the Station and the Hotel shut sometime during the 1900s and were both demolished soon after. Of course the North Wing of the Furness Abbey Hotel was left and this is what can be seen today. 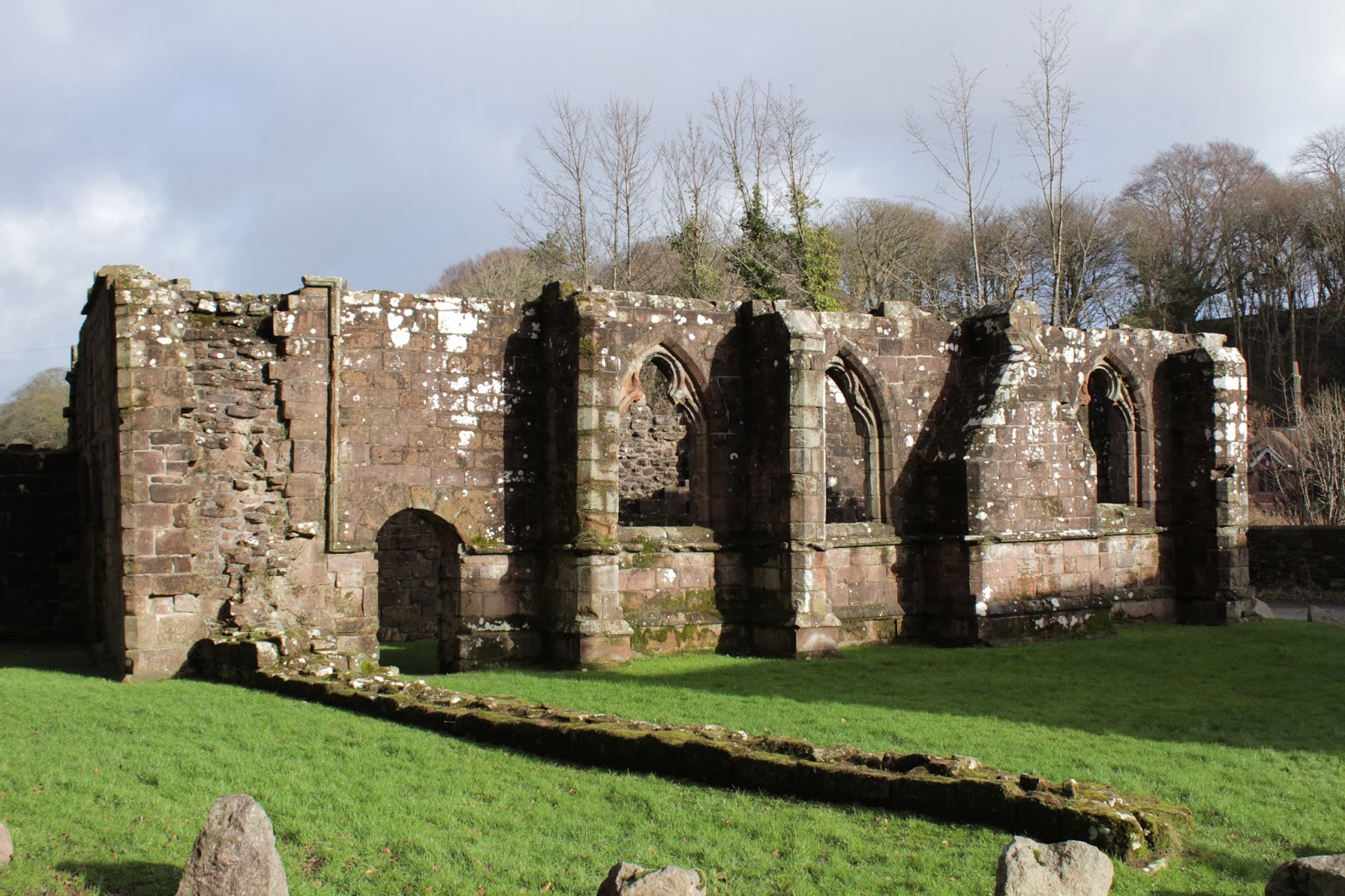 Carrying on past the Abbey Tavern we come to some more Medieval ruins, these particular ruins are that of the Abbey's public chapel and associated gates. The precinct wall would have joined the chapel and carried on past the attached gates. The gates, one large for horse drawn carts and one small for humans, allowed access into part of the Abbey complex. Although there was a further wall extending south off of the Chapel to meet with the larger main gate, this was to prevent the general public from getting into the main Abbey

site. The public were aloud into this area though so that they could go to services led by the monks in the Chapel. The monks could enter from a separate door behind the boundary wall. You can freely enter the Chapel ruins today and see the various features with in. The modern road also runs through the arched gateway next to the Chapel. The Chapel and gates are wonderful fragments of history and are great to look around but they only give a taste of what lies inside the Abbey, so why not pop into the Abbey while you are here?

From the Chapel by the gate we will now head back by the Abbey and when we reach the Manor Road turing we will carry on straight along the Abbey fence. As we go we pass the trackway, on the right, that once led to a quarry, which we spoke of in our Amphitheatre blog. We then reach the Custodian's Cottage, which we also spoke about last time but since then a photo has been obtained by Jackie, who currently runs the cafe there, of a family in front of the Cottage around 1890-1900. We have been given permission to show this image so here it is. Amazing to see a family who once lived in the Cottage. It is reasonable to assume that the man in the picture was in fact a Custodian at the Abbey, as this was the house for Custodians, but, of course, we can't say for certain. Either way it is a lovely photo showing the building in an earlier life. 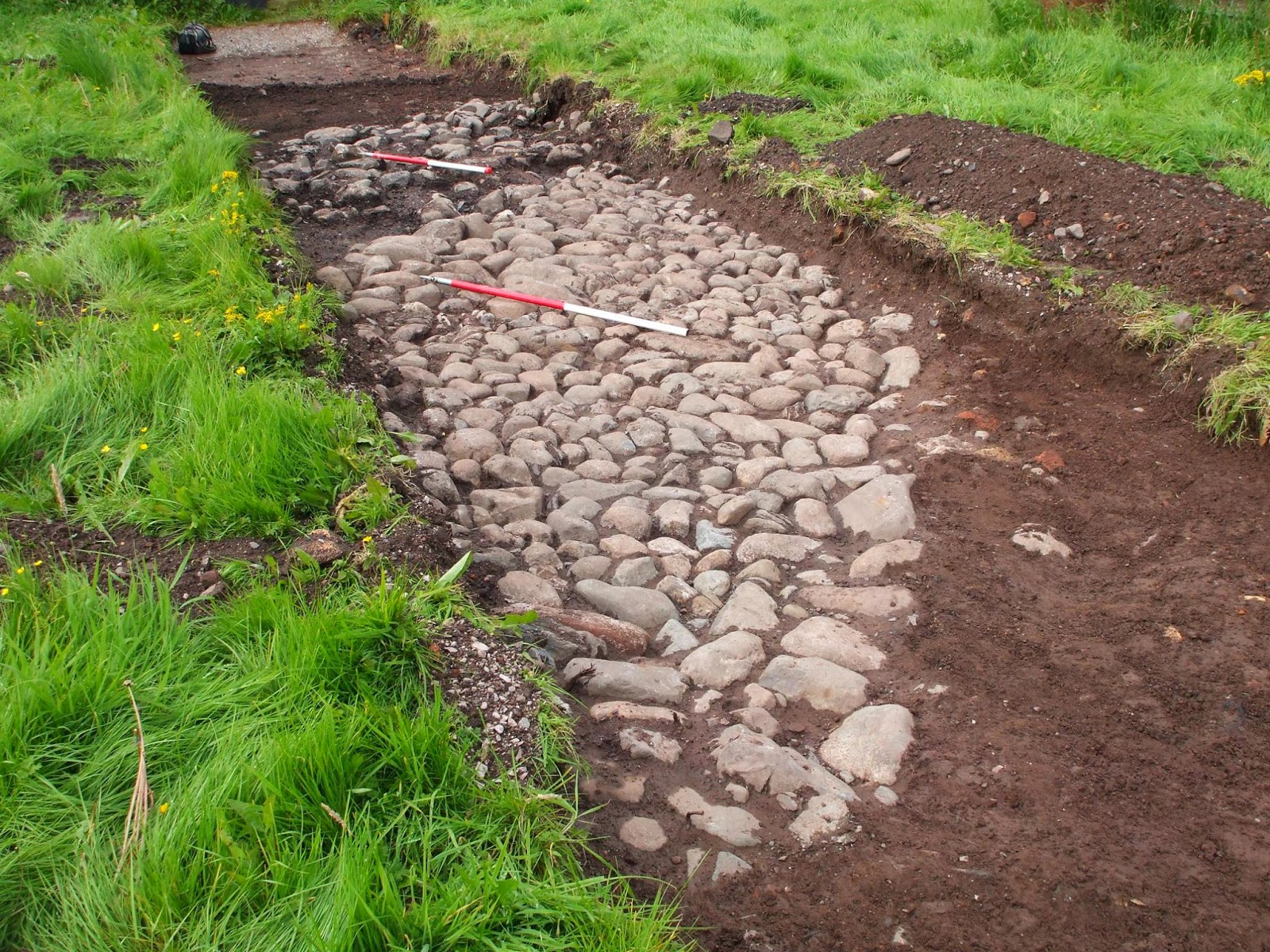 It is also worth noting that to the front of the Cottage, just before the car park, hidden beneath the ground is a Medieval track way! The track was discovered several years ago when a new cycle path was being put in. Not far beneath the surface was a wide stone cobbled track or road leading in a diagonal direction across the cut of the new cycle path. This track would once have been part of the Abbey complex most likely leading to and from the ancillary buildings that would have once sat in the Amphitheatre. Picture courtesy of Gill Jepson. 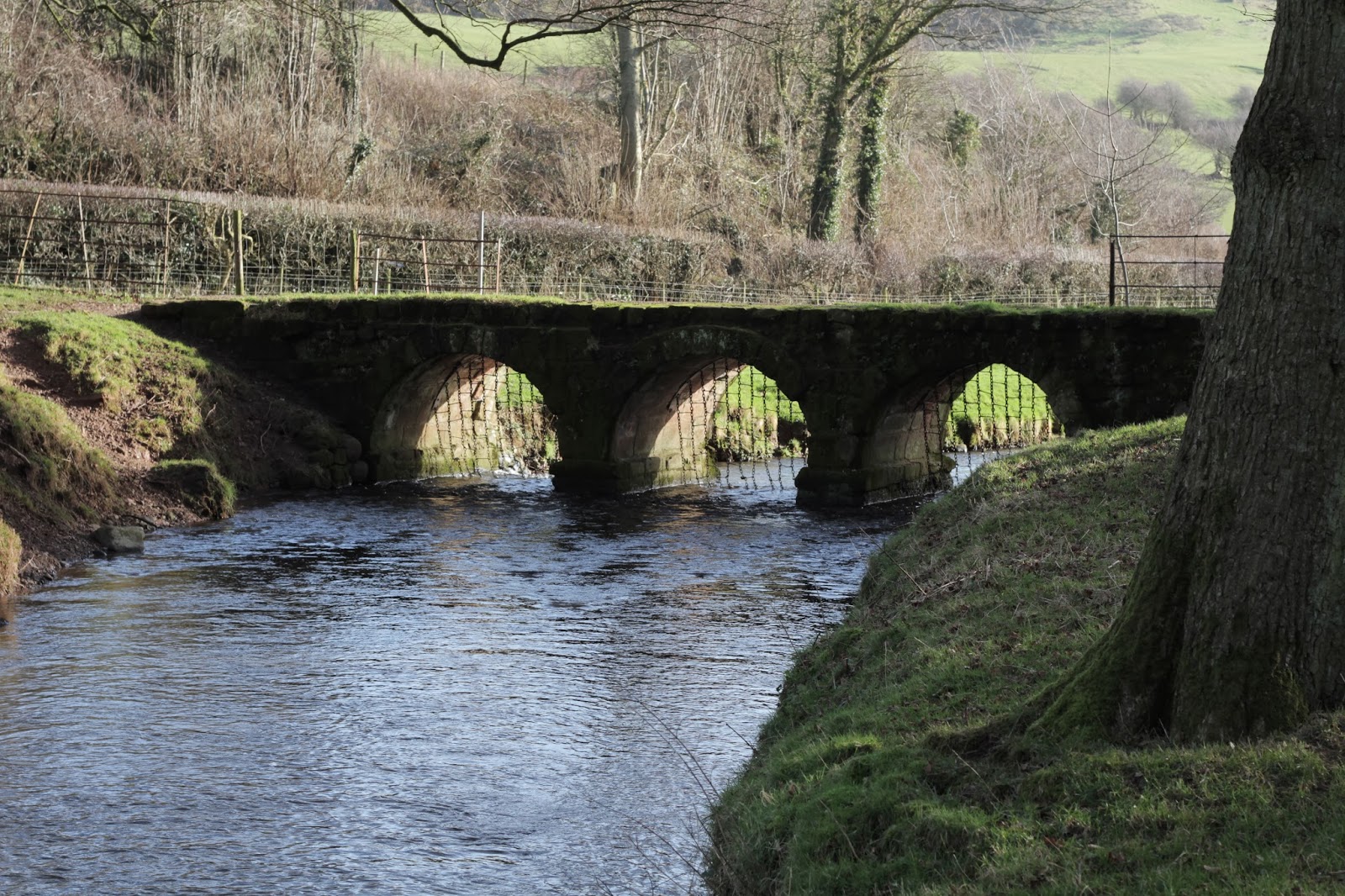 From the Cottage we take a right down a footpath which soon crosses the railway. Having crossed the railway we enter a large field of which we will also walk though. In this field is where the Abbey fish ponds once were and part way through the field is the precinct wall cutting it in two. We carry on past the wall along the edge of Mill Beck stream until we reach the three arched Bow Bridge. This bridge was built in the 15th Century and would have carried a packhorse route. This route may well have lead to the Abbey but quite where it would enter the complex is uncertain. There doesn't appear to be a gateway or gate house in the precinct wall in the adjoining field but there could well have been. Because the railway's construction has cut part of the precinct wall out means we will never know for certain what the wall once did in that spot. There may well have been a gate there.

It is at Bow Bridge that we end our little walk around the Furness Abbey site to look at some more of the lesser known features. This area is bursting at the seams with history from Medieval times through to the present. There is no doubt earlier history too but it is less explored by archaeology. Recently though prehistoric flints were found while stabilisation work was being undertaken at the Abbey and in the past a carved metal Viking head as well as a Roman statuette have been found in the area. This may give evidence of earlier occupation in the valley but it is by no means concrete.

Join us next time when we will be taking a look at a Medieval Priory set in the idilic village of Cartmel.


Old Photos of the Furness Abbey Hotel and Station 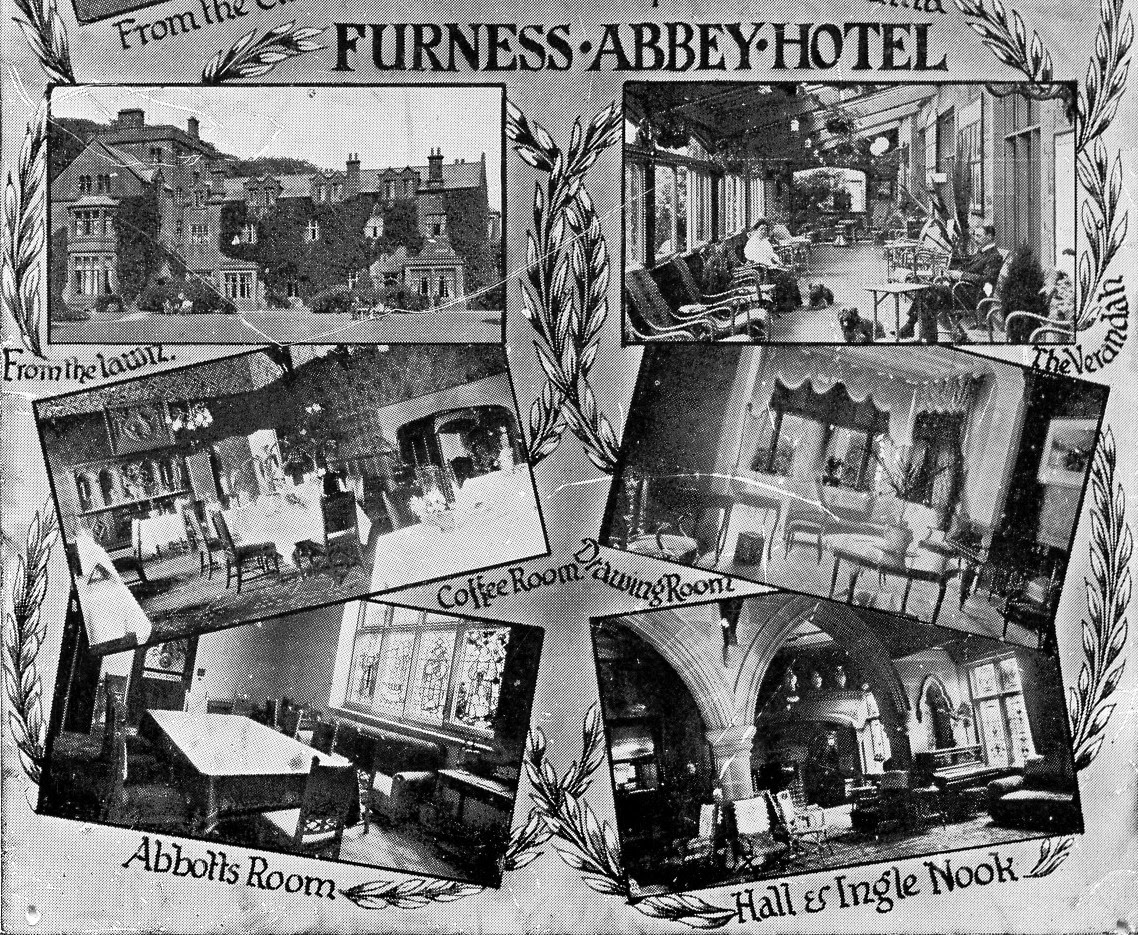