Walney is a beautiful and picturesque island sitting just off the coast of Barrow. Today it is bustling with houses, caravan sites and the like but back in the Medieval period many parts of the island were covered in rich and fertile fields! 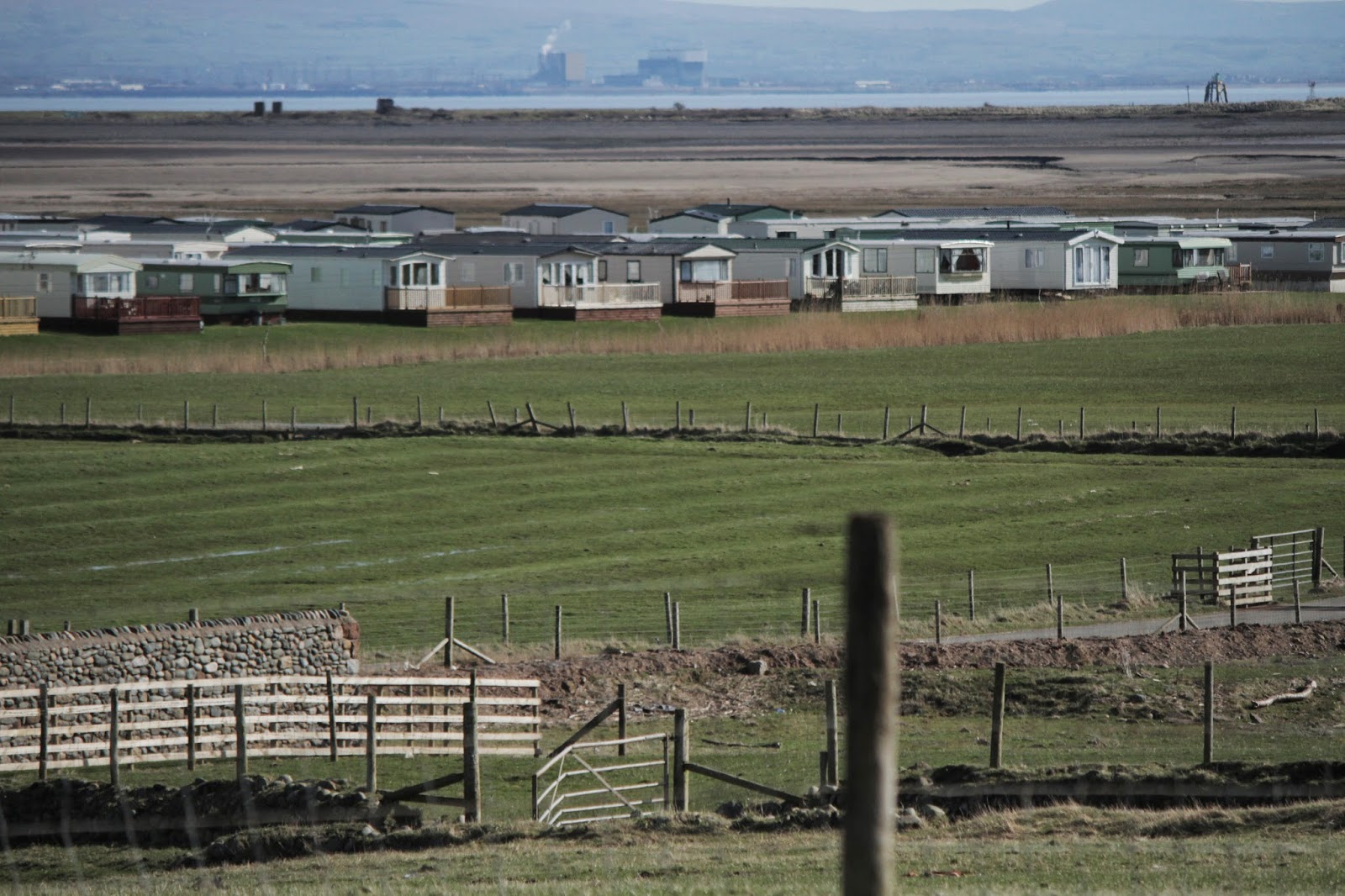 During the period Furness Abbey owned much of the land on Walney and they would take tithes from the various fields, tended by locals. In the present day you can find evidence of the extensive Medieval farming in the form of, well, fields! Not just normal fields though, many of the grassy plains are covered in the archeological feature known as ridge and furrow. These are the scars from a form of ploughing that was popular throughout the Middle Ages. In that time though there were no fences marking out the edges of fields, an open field system was used instead.  Manors, in this case Furness Abbey, would have owned large amounts of land and this land was split into strips. Peasant family's were then given different strips of land of which they could tend. Oddly though each family's different strips were not often next to one another. They could be interspersed with other family's strips, making it a little difficult to work them quickly. The lot of a Medieval peasant was not an easy one, working extremely hard day in day out for not much return. The defining feature of these strips was that they did not have boundary fences and this is where the 'open field' name comes from.

Walney golf course has many ridge and furrow features running across it and they are easy to see from the road side, near to Walney secondary school. The picture above shows the features clearly. 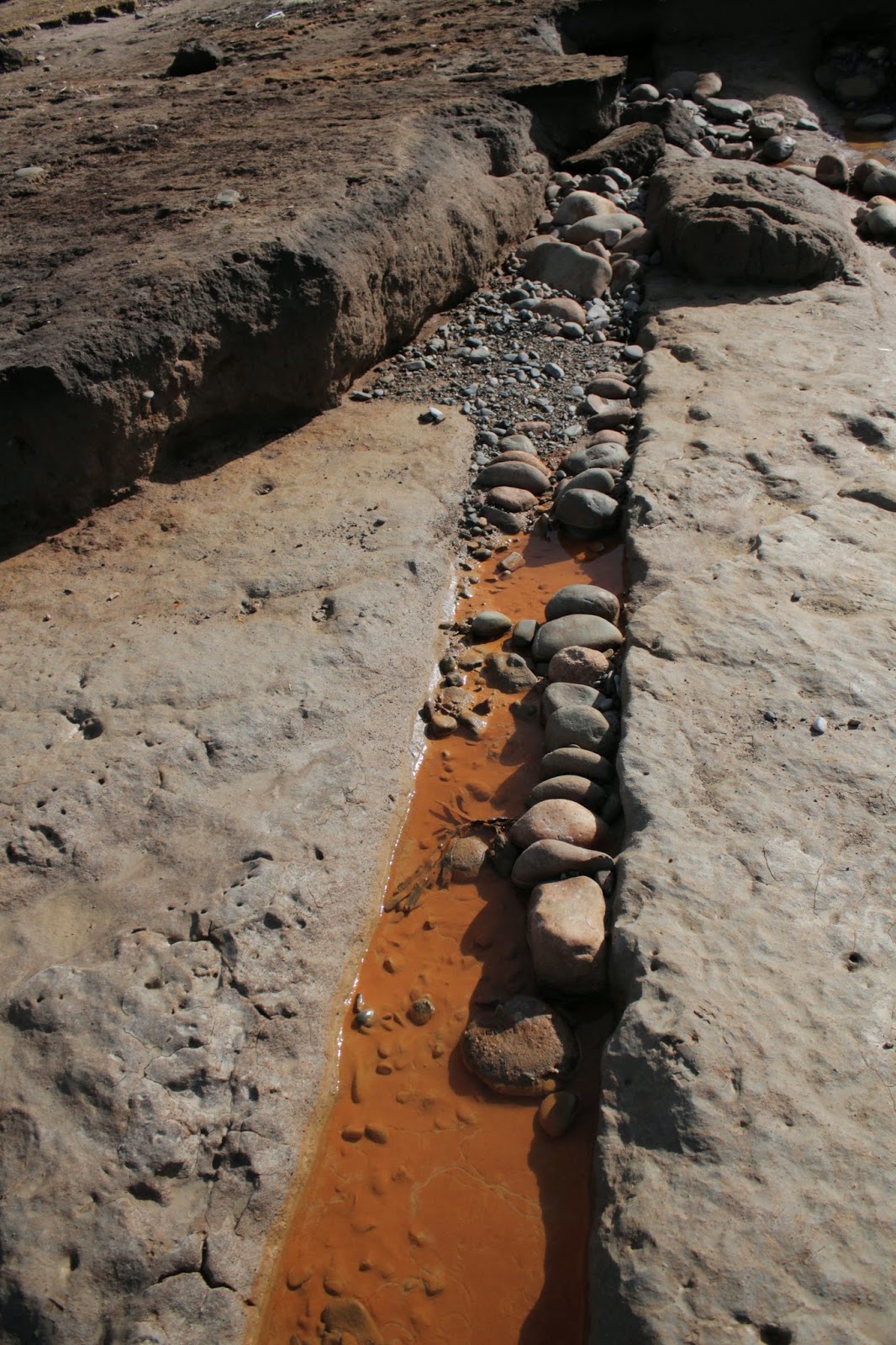 Even more evidence of farming can be found cut though the base clay on certain areas of the Walney coastline. Features like the one pictured right are quite common. These features are drainage ditches dug into the clay. Rich fertile soil would have sat above this clay where crops could be grown, but if water sept through the soil and hit the base clay it couldn't go anywhere thus making the land soggy and useless. To prevent this happening the peasant farmers would dig down through the soil and into the base clay to create long ditches along their field strips. These ditches were then filled with gravel or, in some cases, large stones were placed along their edge with cap stones sitting across the top of them. Once filled the ditches would be covered over again with soil. With these now in place any water would drain through the soil and into the ditches where it could slowly drain away through the gravel and seep off to other areas. These ditches were quite ingenious and would have been truly vital for farming on Medieval Walney. Especially as there was often a lot more rain fall in the period than we have today as well as some very harsh winters. 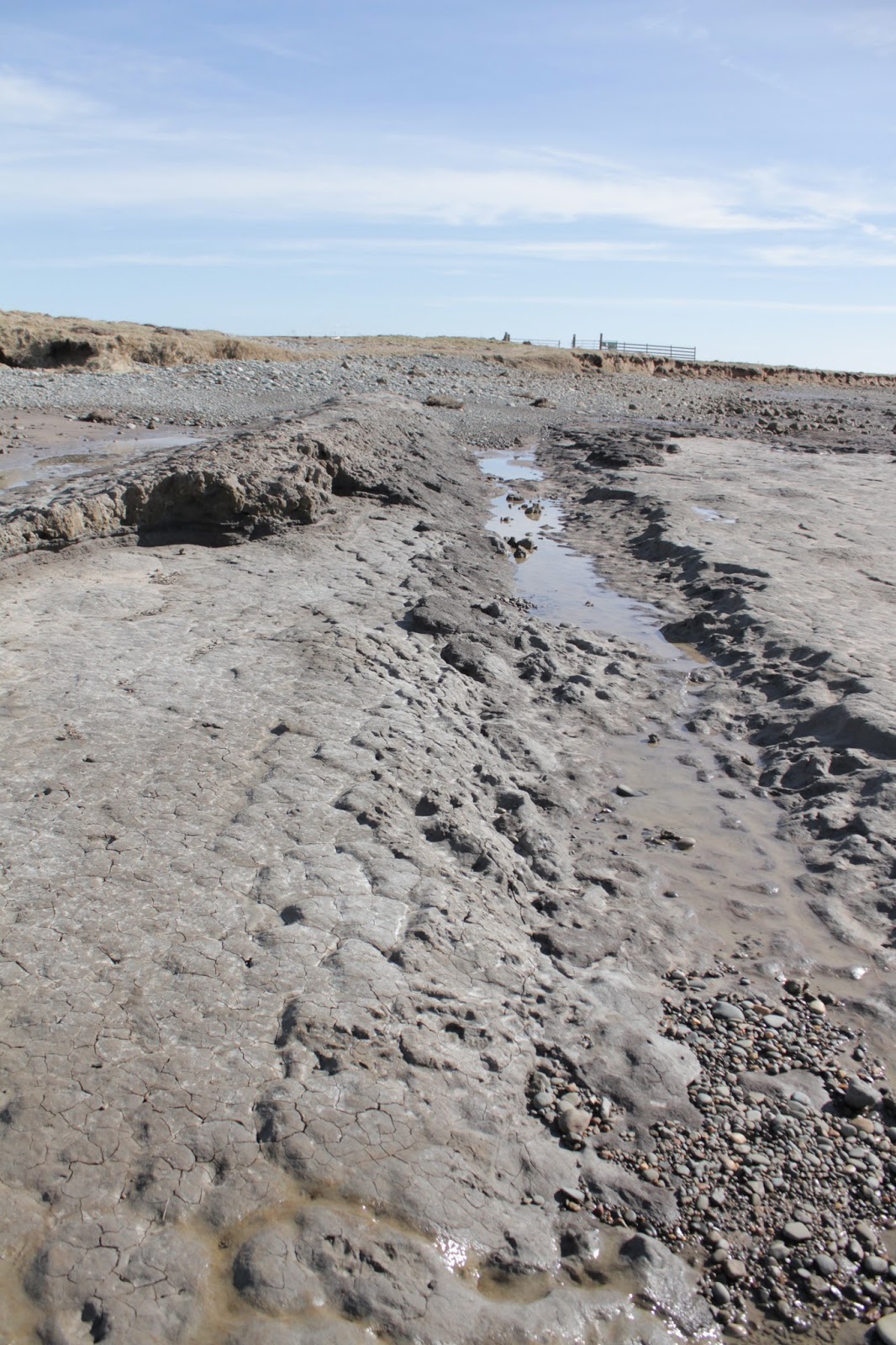 Elsewhere on the Walney's coastline there is another, final, remnant of farming gone by; a field boundary (pictured left). This boundary consists of a large mound and ditch. This feature would have marked the boundary of one large field, the smaller strips siphoned off with in. A large ditch was most likely dug along the edges of the fields to, as the smaller ditches, help with drainage. This ditch though would have no doubt been visible on the original earth surface.

There will be many of these features, both drainage ditches and boundaries, hidden beneath the ground and under vegetation all across Walney. The ones shown here are only visible now due to coastal erosion. The sea has slowly, and in recent times rapidly, eaten away at the soft earth to reveal the peat and clay below. Go back even a hundred years and some of these features would still be covered by soil and grass. Although erosion is ever changing our coastlines and causing no end of trouble, it does bring to light some of the wonderful heritage hidden beneath the ground!

The marks of a Medieval farming landscape across Walney are vast and fascinating. Imagine the peasant families of old going out everyday to tend their strips of land, battling the winds and harsh weather, moving oxen to pull a plough through the earth, slipping and sliding on the mud. It must have been an extremely hard life, all to grow crops for the Abbey and not to receive much back for your own plate. Although it must have been hard, the farmers were well versed in what they had to do and no doubt made it look relatively easy. Thanks to them though we have these wonderful remnants to discover across the countryside and if it wasn't for them the area may be a lot different today.

Come back on May 13th for the next blog post.