Perched on the hills above Pennington is an interesting and little explored heritage site, Pennington Castle Hill.

This castle is not your typical castle, it has no ruinous stonewalls, it has no obvious remains, instead it has a series of earth works that give evidence of the structure that once stood here.

There is little known about this site with little archaeological work happening here. What is known is that this was the original seat of the Pennington family, now in residence at Muncaster Castle near Ravenglass. This site was the pre-cursor to Muncaster and was where the family lived until around 1242 when they moved to their new home. Although they did hold onto this site until about 1318. 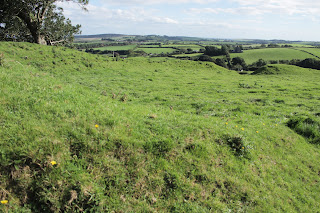 Pennington Castle Hill today is evident from a series of earth works. It has a semi-circular ditch and rampart creating a defendable structure where a building would have sat. Whether there was a stone built castle on the site is unclear but there doesn’t seem to be visible evidence of one. It seems likely that there was a wooden structure here instead. This was common after the Norman invasion of Britain.

Wooden castles, known as motte and bailey castles, were erected quickly across much of the island. It is plausible that Pennington may well have been a motte and bailey, although evidence of a bailey isn't clear. It is also possible that it could be a fortification known as a ringwork. A ringwork is a defencive structure built in a round or oval shape with a ditch and rampart as defence. Basically a motte and bailey without the motte. These structures started to appear in England towards the end of the 11th Century after the Norman conquest. Many such fortifications, as well as motte and baileys, were later replaced with stone built structures and it seems logical that the Pennington family decided not to replace their castle here with stone as they planned to move. When they moved to Muncaster they built a new stone castle, similar, if larger, to the pele tower seen at Dalton-in-Furness. Having done this the wooden defence at Pennington would become somewhat redundant, although it most likely stayed intact until 1318 when the Pennington's finally gave up the stronghold. 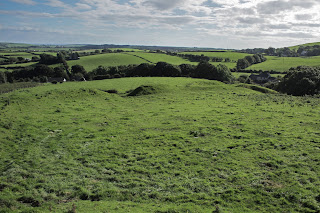 This long abandoned fortification commands stunning views across the Furness Peninsula, sitting on the edge of the Furness fells overlooking the southern and eastern plains. This gives it the perfect location for a fortification where the Pennington family could live and lord over their state. The family would have looked after the carucate of Pennegetun (Pennington), which for a time was taxed £5 6s. 8d. this shows that it was a relatively wealthy state in the area.

Pennington Castle Hill is a lovely place to visit but it does leave you somewhat pondering its history and what it could and would have been. A public footpath runs through the field that holds the site and it is well worth a wander, just make sure you wear some decent wellies or boots; it gets a little muddy in places!