In our 2013 Halloween Special we took a look at several spooky tales from the Furness Peninsula, now, three years later, we will take another look into the mysterious side of this beautiful area with even more ghost stories! So turn the lights off and let's get started...


Plumpton Hall just outside of Ulverston is a lovely 17th Century manor house but it is believed that a manor would have been here since the 1500s. With such a long history there are of course some ghost stories surrounding the property. One of the most notable is that of the Haunted Lantern, which I will speak of shortly, but first lets take a look at the spooky, yet sadly defunct, story of the Plumpton Dobby!

The Whitehaven News printed an article in 1899 which told of 'A Genuine Ghost: Caught on Christmas Eve' at Plumpton Hall. The tales of a haunted room had long been know at Plumpton, a room where the horrible sounds of chains clanking, shrieks and groans which would scare even the most hardy of folk. The room was so famous that many were desperate to spend a night in the room. The ghost was said to be so terrifying that the owner of the farm only charged a small rent from the tenant. One year though two servants from a near by farm were walking home on Christmas Eve when they spotted the fabled ghost; white from head to toe with a grinning human skull, groaning loudly. Un-deterred the two pursued the ghost. They followed it through some woodland until suddenly the ghost disappeared. Curious? The two ran forward to where the ghost had been to discover a hole. Inside the hole was a head shaped turnip lantern with a candle with in it, chains and a white sheet with, not so surprisingly, the farmer of Plumpton Hall wrapped up inside it. After all that the Plumpton Dobby was in fact the farmer trying to, no doubt, make a bob or two by creating a terrifying ghost!

THE HAUNTED LANTERN OF PLUMPTON HALL

Another interesting tale from Plumpton is that the hall possesses a haunted brass lamp which will always find its way home should it be removed from the building.

The brass lamp was said to have washed up on shore from the wreck of a ship from the Spanish Armada (although experts have now said that it is much more recent in date). For many a year the lantern has hung in the hall and often lit to help guide travellers across the sands. It has also been the centre of some mystical behaviour and if ever it is removed from the hall it always finds its way home and is discovered hanging back in it's rightful place, even when extreme lengths are gone to to remove it; like the time it was sealed inside a barrel and thrown out to sea.

Who knows what is going on with the lamp and why it is so determined to remain in the hall! Is it paranormal or is it just a fanciful tale? I'll let you be the judge of that.


A SINISTER SOUND INSIDE THE OLD POLICE STATION

Many years ago now myself, my brother and some friends had the opportunity to stay the night in the Old Police Station and Courthouse in Dalton. At the time the site was being renovated into a cafe and apartments and the place was, especially at night, quite spooky!

We were set to sleep in a small room to the front of the building but during the night we went for a wander around in the pitch black. Eventually we ventured into the Police Inspectors house, which is attached to the station, and were situated in a large room on the first floor. Whilst in the room some loud and strange noises started to emanate from the floor above us. Prolonged scraping noises were clear to hear, it sounded like someone dragging heavy furniture across the floor, or something more sinister. All in the room were, quite reasonably, scared and panicked about this. We were the only ones in the building at the time, what on earth could be making this sound!? It carried on for a while until seeming to stop. We built up some courage and, slowly, moved up the stairs to the room which the noise had come from.

As we entered we were met with a large empty room. No one was in there, nothing was there which would obviously explain the sound and everything was a little eerie. To this day we don't know what caused that strange and scary sound. All we do know though is that when the station was still in use the wife of one of the Police Inspectors had tragically fallen on a set of stairs while taking food to the prisoners. This fall killed the woman and some may say that her spirit still haunts the station. As we were in what was once her house who's to say that the noise we heard wasn't from her long dead spirit?


A RECENT, MYSTERIOUS, SIGHTING OF A MONK

It was the 14th of September 2014 when two women were walking near the abbey, they stopped for a moment to enjoy a view across the ancient ruins towards the abbot's house when they noticed something a little strange. There was some movement in the woodland behind the abbot's house, they looked closely and there was a hooded figure, "Oh god, it's a monk!" one of the ladies gasps. The figure wore white robes with a black scapula and hood, the typical look of a Cistercian monk. The figure stood for a moment before walking a little to the right and stopping again, it looked out over the abbey before moveing away into the bushes.

The ladies weren't to worried at this point as they thought it was probably one of the Iron Shepherds, a local living history group, but they still decided to go and have a look where they had seen the hooded vision. They rushed up the hill and into the woods. When they arrived there was nothing,, no sign of anyone, the woods was eerily empty save two ladies with toddlers on the road ahead. Slightly puzzled they went in search of the Iron Shepherds but they were nowhere to be found, and as they later found out hadn't even been in the area that day.

The ladies went to see where the figure had been, as they arrive though they start to feel cold and the hairs stand up on the back of their necks, nothing was around. They decided to leave a tissue on the fence where they had seen the monk and wandered back down to the roadside where they had originially been stood. As they looked up once again they are met with a completely different scene, the whole area looks different from before as if they had been looking at a completely different place or, indeed, time!

To this day the ladies do not know what they witnessed that afternoon but it certainly is something that will remain with them always.

In the Autumn of 1934 a young butchers boy was cycling through Abbots Wood towards the road having made a delivery. Suddenly he heard a strange noise and the temperature dramatically dropped. He skidded, came to a halt and hopped off his bike. Looking up the boy was confronted with a mysterious figure, a figure in long robes, a monk! Petrified he scrambled back onto his bike and raced off down the hill to get away.

The boy maintained this story for the rest of his life until his passing at the age of 81. The incident must have been truly terrifying!

This tale is from a little further up into the Furness Fells at Claife Heights on the west side of Windermere but relates to the monastic site of Furness. 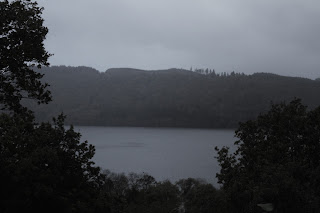 Many years ago now a ferryman, quite new to the job, was shored up on the east side of Windermere at Ferry Nab awaiting passengers to take over the mere. It was a dark and stormey night with not many people to aid when cries from across the lake started to echo over the water; "Boat! Boat!". The ferry man was quick to head out, if slightly reluctant, and rowed off over the water to the west. He was gone for sometime. Awaiting passengers started to gather on the east shore when the ferry man returned. All awaiting were surprised to see that he had no passengers. When he finally made it back to shore the ferry man was so terrified he couldn't speak and had gone mad. He could not say what had happened whilst he was at Claife but the incident must have frightened him so as a few days later he passed away.

Following this faitful night more cries of "Boat! Boat!" were heard but no ferryman was brave enough or foolish enough to listen and all stayed moored on the east. Eventually the cries got to much and were loosing the ferrymen business so a monk from Lady Holme Island was called to exorcise whatever spirit lay to the west. The monk duely responded and performed an exorcism, he banished the Claife Crier, as the spirit had become known, to a quarry in the area, now known as Claife Crier Quarry, ‘until men should walk dryshod across the lake’.

The Crier is believed to be that of a Monk from Furness Abbey who's job was to save the souls of deborched women in the area. He fell for one of his clients, a lady of Claife, and one day followed her back to her home at the heights, she then regected him. The monk was so distraught that he cried and wailed until eventually dropping dead. His spirit then lingered and continued to cry out eventually calling out for "Boat! Boat!".

Although apparently exorcised the Claife Crier is still said to be roaming the heights and has often been heard crying out across the lake to this day as the night draws in...

I hope you have enjoyed this spooky special and haven't been too scared. If you want to read some more ghostly stories from Furness then do take a look at our 2013 Halloween Special and until next time, sleep well!