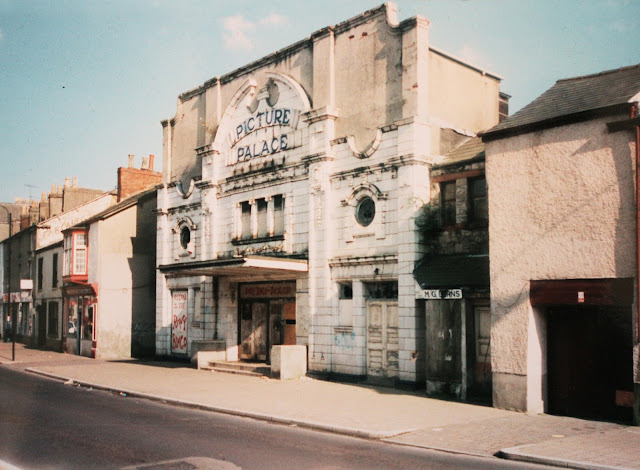 This photo was taken in 1997 and shows the then dilapidated remains of the old Roxy Cinema and bingo hall in Dalton. The building was one of the 'Picture Palace' style cinemas, the name visible at the top of the building in the photo above. These 'Picture Palaces' became popular in the 1930s and were built in many towns across the north west.

A cinema had stood on this site since 1912 when two men, Backhouse and Drinkwater, built the Empire on the site of a former brewery. This was Dalton's first cinema and became a popular place to be.

In 1936 however the interior of the building was demolished, leaving the front mostly intact, and rebuilt in a more contemporary and luxurious style. At this point its name was changed to the Roxy and was re-opened to the town on Christmas Day of that year.

In later life the cinema closed its doors and the building became the Roxy Bingo Hall. It stayed as such until it too closed sometime in the late 80s to early 90s, leaving the building to become more and more dilapidated.

Sadly this building with is wonderful, evocative architecture no longer exists. In the late 90's the Co-operative company bought the building and it's land, demolished it and built a brand new supermarket on the site.

It is a real shame that the old cinema had to go. I can remember when it did - I used to love the old building, it was a real snapshot in time and looked so nice (if a little run down). I often wish they had kept the frontage of the cinema and incorporated it into new building but alas this never happened.

Still I am glad that images exist of this wonderful old building so it can be remembered. The image above was taken by my father before demolition took place and I'm so please we have this image of what was one of my favourite buildings in the town.