A Medieval Farmstead upon a Furness Fell | VIDEO

Heathwaite Fell, sitting to the north of the Furness peninsula, is a vast and wild place but hidden amongst the bracken and the windswept fields is a hidden gem. A medieval farmstead!

This farmstead is the highlight of a dispersed medieval settlement with it's associated field systems spread across the fell.

The farmstead, which is of more than one period of construction, consists of five interlinked enclosures made from stone walls with a domestic area to the north. A couple of these enclosures have land which has been improved for agricultural cultivation with the rest being un-improved and most likely for animal grazing. There are also a few small rectangular structures within the enclosures. Their function is unclear but I do wonder if they may have been sheep pens for isolating and sheering sheep.

Extending out from the farmstead is a selection of field system made up of banks and walled areas. The largest of these fields being around 5.7 hectare in size with all containing the archeological feature known as ridge and furrow, a feature spoken about in a previous post. These features give evidence to the cultivation of this land for the growing of crops.

Close to the farmstead there are also three kilns. The one pictured below being on its east side. These kilns are made from thick, circular stone walls with large outer banks and deep central hollows. Two of these kilns, interestingly, have been constructed from former Bronze Age clearance cairns. These cairns were created when Bronze Age man cleared land for cultivation. To do this they removed large amounts of stone and rock from the fells and deposited them in large piles known as cairns. In the medieval period some of these were re-purposed as kilns for creating potash. 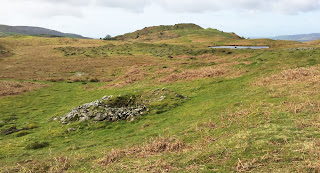 Potash was made from bracken or wood and was used to make soaps for the woollen trade - an industry that made vast amounts of money for the local abbey. Potash was created by burning wood or indeed bracken, which makes sense here as bracken covers much of the fell, removing the ash to then dissolve it in boiling water. Following this the solution is evaporated in large pots to leave a white residue, the potash (potassium chloride).

It is also theorised that these kilns may have been used to dry timber for use in smelting lead ore, it feels more likely though that they were used for potash as sheep were almost certainly reared here and no doubt had their wool shorn here.

This fascinating remnant of our medieval past truly is a hidden gem. It's remote location gives stunning views of both the Lake District fells and the Duddon Estuary, it's low lying remains give a tangible connection to the past and the lumps of and bumps of the ridge and furrow give you a sense of the true grit and determination our ancestors had when cultivating the wild land they lived in.

A road runs near to this wonderful site and a short walk will get you right to it. It is well worth a visit and will open your eyes to our medieval past here in Furness and those men and women tirelessly working the land.